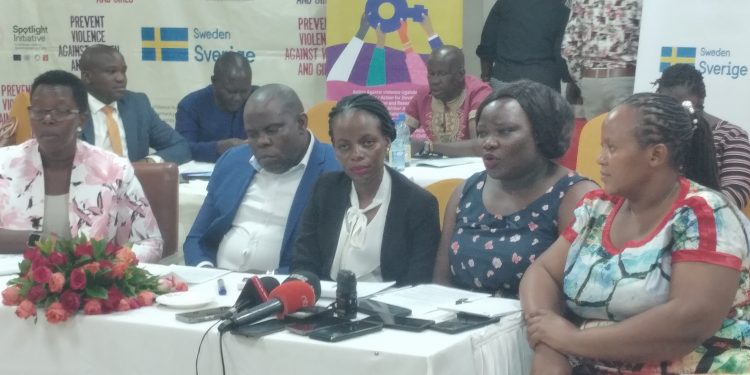 The Center for Domestic Violence Prevention together with Members of Parliament has condemned the increased prevalence of violence against women and girls in the country.

Gender activists have also condemned the recent events of undressing women along Northern bypass in Kampala who were suspected to be involved in highway robberies.

While addressing a joint press conference in Kampala between Center for Domestic Violence Prevention (CEDOVIP) and a section of members of parliament on the increased forms of gender based violence, it was noted that even though government has enacted some laws and put in place policies to address discrimination against women, the women and girls remain unsafe and do not enjoy full protection of the law.

According to 2022 UBOS study on Violence against Women, 51% of ever partnered women in Uganda between 15-49 years have experienced some form of violence in life. This highlighted an example of a recorded video on social media where women alleged to have been involved in highway robbery were undressed by crowds at the Northern Bypass in Kampala last week. Activists and legislators claim this violated their dignity.

Gender activists have also condemned the practice of denied access to services at public offices on grounds of dress code. They contend that women should be allowed to exercise their freedom to dress the way they want.

In the same vein CEDOVIP Has come out strongly to rebuke practices that have been adopted in some districts of Northern Uganda by market vendors association which ban women from sitting in front of trucks on grounds that they entice men and end up causing accidents saying that this is wrong.