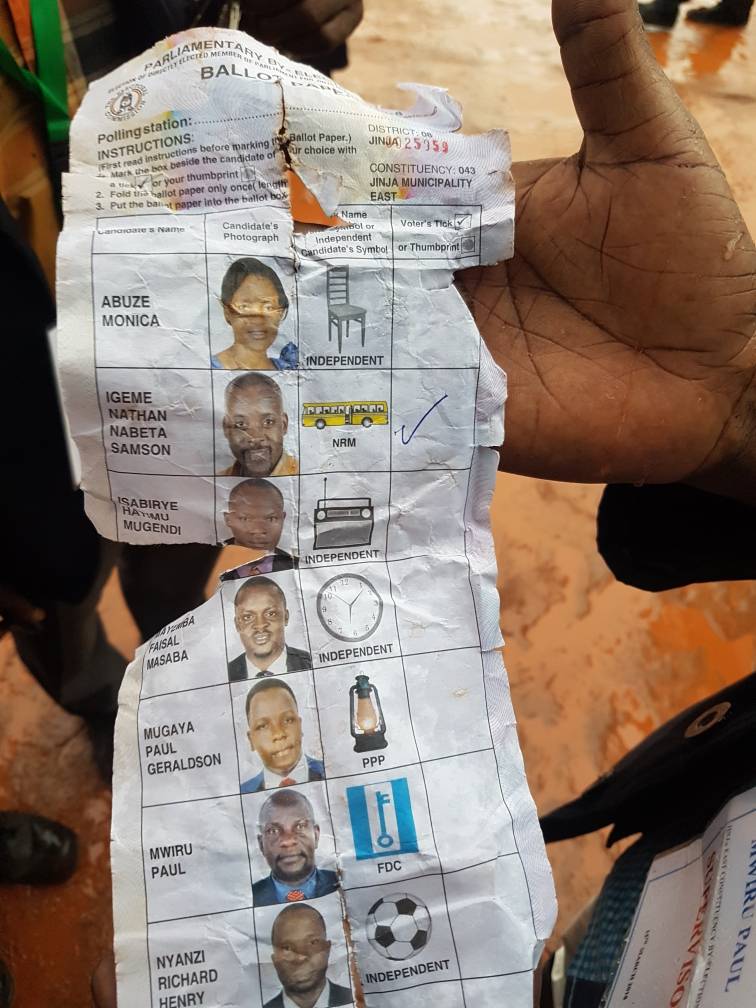 Opening of polling stations and polling: The March 15th 2018 by-election in Jinja Municipality East Constituency registered a slow start – especially after the heavy morning downpour disrupted the commencement of polling. Several voting places around Jinja metropolitan area including the four (4) polling stations at Main Street Primary School commenced voting after 8:00am.  This was partly due to the lack of the five (5) voters required before commencement of voting – due to disruptions caused by the rain.  Voters braved the heavy rains that characterized most of the parts in Jinja Municipality East Constituency to go and vote at their respective polling stations.  Queues at polling stations increased in length in the afternoon even though the rains continued.  Under the circumstances, there was a general enthusiasm around the polling day as reflected by the long queues of especially young men and women that turned out to vote.

Deployment of Security: This could have been the most policed by-election in Uganda’s recent history, with a single polling station being manned by more than one polling constable.  Most urban polling stations had as many as 30 security persons supervising a polling station – a number that surpasses what has been seen before in hotly contested elections such as, the Kyadondo East Constituency by-election conducted in 2017. Volatile Jinja town areas attracted much higher deployment. In some cases, security deployment was of an intrusive nature and catalyzed rowdiness among locals.

Incidents: The Jinja metropolitan area, specifically Main Street was the theater of chaotic scenes resulting from occasional running battles between the security personnel and locals.  At for instance, Main Street Primary School, police conducted various arrests on account of NRM party supporters allegedly campaigning around the polling center.  A phantom polling station was in the earlier part of the day erected at the Main Street Primary School bringing the total number of polling stations to five (5) instead of four (4).  Vigilante citizens exposed this anomaly and the 5th polling station was immediately removed. Voters demonstrated exceptional vigilance in the by-election, to the extent that most of those who turned up to vote at different polling stations remained around, until the time of counting the votes – after 4:00pm.

Allegations of vote rigging, ballot stuffing and voter bribery remained widely spread. At some point, FDC President, Patrick Oboi Amuriat who was in the Constituency displayed a ballot paper that was pre-ticked in favour of NRM’s Nathan Igeme Nabeta.  The EC however dismissed the complaints around leaked and pre-ticked ballot papers noting that the serial numbers on the allegedly pre-ticked ballots were different from those that EC held in their custody.

Candidate Agents: Party and candidate agents from both the ruling NRM and the opposition demonstrated exceptional watchfulness of the polling process.  Opposition MPs and senior figures watched the voting process at all the 47 polling stations in Jinja Municipality East Constituency.  Senior figures from the NRM party likewise guarded their candidate’s vote in the Constituency.

Management of Polling Day: The EC deployed its staff to work as senior polling officials at the 47 polling stations in the Constituency.  This may have accounted for the fair level of efficiency witnessed during the polling and counting process.  Counting of votes is still on going at most polling stations.