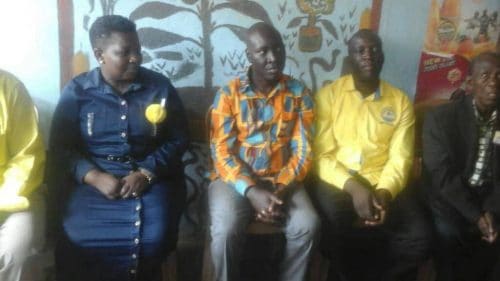 The NRM parliamentary flag bearer for Bugiri municipality polls Francis Oketcho is spitting fire against the NRM secretary general accusing her team of having failed him. He says prior to the coming of the secretariat bosses to Bugiri, he was moving steadily and was assured of victory until when they came and spoilt his ‘game’.

“On the day they came, there was a [boda boda rider] killed by unknown people and this affected me badly. I lost boda boda votes. They came to spoil my game” Mr Oketcho claims.

Qn: What is it between you and the Secretary General? There are allegations that you don’t rhyme well and this could have caused the loss.

FO: Well, I prefer reserving that to myself. I wouldn’t want to go into it but what I can assure you is that the biggest problem came from the party itself. We had people within the system who were feeding the opposition whatever we were doing and planning. I was very strong and I am still strong. I am actually waiting for 2021. If Bobi Wine and DP were not there [to help Asuman], I was going to beat him hands down. If Asuman thinks he is strong, let them give us space between me and him without Bobi Wine. I will beat him hands down.

Qn: You were the NRM flag bearer. Why did you lose this important election?

FO: The divisions in NRM played a lot of confusion. Even when the president came for the rally in Bugiri, this confusion between [minister] Persis Namuganza and the Secretary General [Lumumba]. It was an ugly scene that day. So, there was a lot of infighting.

Secondly, we faced a challenge of inflated voters’ register by the opposition. For us we were busy in the NRM primaries and these people used this time to ferry people from other areas to register. They also came with fake national IDs manufactured from Nasser road in Kampala.

Thirdly, you know Bugiri has many Moslems. The election was put on a Friday. The choice of this polling day didn’t favor us. My opponent being a Muslim also, they mobilized people in the mosques and we didn’t have access to those mosques. They gave people money from mosques and this explains why the voter-turn up was massive shortly after juma prayers [around 1pm] because people had been paid to go and vote.

Qn: Are you saying Muslims out-number Christians in Bugiri?

FO: Christians are the majority but what I am saying is that these mosques helped the opponent a lot. Even Christians were sent there [mosques] and were given money from there. It was a big trick and we had no way we could storm those mosques to disrupt the prayers.

The other reason we lost was in relation to vote stuffing. These people compromised the police. Asuman [Basalirwa] had no votes here. He is a Kampala politician. But he got those votes after stuffing and bribing. That’s how he got that margin.

Qn: He is already elected and he is your MP. What next?

FO: Asuman being opposition, he won’t do much for the people. We are going to fail him. First of all, he is heavily indebted. Unless he is going to use his personal money but for government, he will not get anything.

Qn: You accuse the party of having caused all these problems to you. Can you explain more about it?

FO: They spoilt my game. They came to do accountability just. My campaigns were going on well until they came here to spoil my game. The SG was here for three days and immediately they arrived,some boda boda rider was killed. This affected me a lot. I lost all votes from boda bodas. If they didn’t come, I would have won. If they left me with my people, I would have managed my people.

Qn: Are you saying even the president’s coming there disadvantaged you?

FO: The president’s coming was okay and I benefited out of it but as I told you earlier, because of the infighting, you saw what happened on the rally when Kasule [SG] and the minister [Persis] almost tore themselves up. It painted a negative picture in the eyes of the voters. The internal bickering caused it [loss].

Qn: You’re talking about Lumumba but Namuganza and Milton Muwuma were also there. Actually there’s claim that all candidates had to go through Muwuma to access the SG. What is your comment?

FO: Namuganza was supportive but some people were seeing her as [if she was] entering their territory. Muwuma was also there as a mobilizer but I think he came for accountability purposes. But anyway, those are bygones. Let me wait for 2021. It is not far. I am actually launching my official campaigns on Wednesday. I am going to get the thousands of people who voted for me and we go back to the front-line. We are going to make the ground very complicated for him. We want to assess his performance. We are going to work on him. We are going to deploy agents on every village to assess his performance. It is going to be a difficult term for him. I am sure that time [2021] he will not have the likes of Bobi Wine to help him because even Bobi will be in Kyaddondo East fighting for his seat.