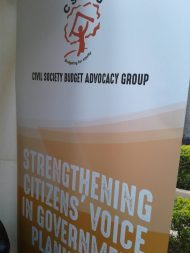 Budget advocates under their umbrella body, CSBAG are challenging Ugandan govt to consider having a people centered budget that also targets transforming the economy of this country than having a consumption budget that does not contribute to the drivers of national economic development.

Addressing joint press conference today as the country kicks off budgetary consultative conferences across the country, Richard Sewakiryanga the executive director NGO forum says emphasis should be put on agriculture financing to boost the sector that employs the biggest number of Ugandans as this will in the long run see most farmers receive better and improved farming skills to improve on the quality and quantity of produce from the farms thus increasing their incomes and their livelihoods as well, improve private sector credit to drive it out of the slumber where its decelerated as its being driven by bad loans and subdued economic activities.

Activists say that private sector credit growth contracted in the first quarter of the FY 2016/17, recovered in the second quarter but declined in February in 2017 to 5.5% compared to 6.3% growth in January 2017.

However, the advocates are concerned that the country’s economy has continued to register a fast backward moving trend which has seen many big businesses close across the country and this has been attributed to budgets that aim at transforming the economy.

The activists also urge Ugandan citizens to always pay taxes to enable govt provide services to them and then call for accountability.

However, Namaga Imelda from Uganda debt network cautions govt against drawing a budget that seeks to finance debt service as compared to catering for programmes that seek to improve livelihoods of Ugandans.

She further warns that the domestic debt is huge and is continuing to grow each day that passes coupled with the external debt which are way beyond the standard limits and now at past 100%.