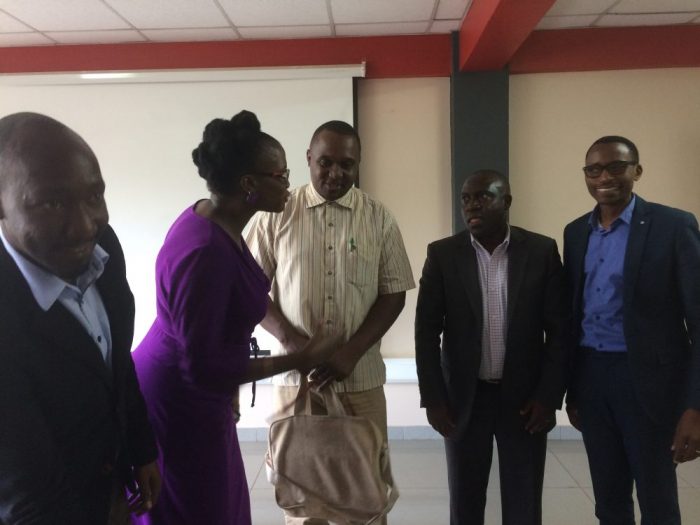 Civil society actors in Uganda are strongly questioning the huge silence exhibited by the African Union on the continued DRC Ebola crisis which has left 1000 lives lost.

Addressing a news conference today in Kampala, a consortium of health NGOs in Uganda led by the Africa bureau chief, AIDS Healthcare foundation Dr. Penninah Iutung are putting pressure the AU to show urgent leadership towards responding to the escalating ebola crisis.

Penninah further urges the global health organization to declare the outbreak a public health emergency for international concern as well as approve the ebola vaccine to enable a wider distribution to all who need it.

She further asks the DRC government and other partners to engage the community by increasing awareness about the reality of the current Ebola epidemic and its containment measures. “ There must be a connection with the community as well as building mutual trust so as to enable the acceptance of infection prevention and control practices such as safe burials and decontamination activities.”

However, the executive director Coalition for health promotion and social development (HEPS-Uganda) Denis Kibira and Derrick Aaron Nsibirwa the program associate CEHURD note that a number of ebola vaccines BY GSK, Johnson and Johnson among others are waiting approval from WHO since 2014 which is adding to the burden of inaccessibility and continued high cost of the only available vaccine.

The two further insist, this has continued to violate victim’s rights to free and easy access to medicines.

But the president, Uganda medical association, Dr. Ekwaro Obuku is demanding for heightened screening of victims at all border posts as well as availing border health facilities with the required medical equipment to handle cases as they arise.

The ebola crisis ravaging eastern DRC is the 2nd deadliest in history following the 2014-16 crisis in west Africa with the 10 month crisis now claiming over 1200 lives with 200 of them occurring in May alone.

Historically, DRC has been vulnerable to Ebola outbreaks, recording over 10 of them in 40 years. The current wave is the worst documented in the country and has the potential to be very catastrophic, since the current health response is being hampered by heightened insecurity situation thus making the whole region and global community vulnerable to the spread of the dangerous epidemic.

The health activists now want the AU and WHO to come out fast to arrest the situation to save more lives.

Ebola is spread by coming into body close contact with a patient, sharing items with victim and always presents with fever, vomiting, passing out of water in all body outlets, body pain, weakness among others and can be prevented by maintaining proper hygiene, not coming into contact with a person carrying the disease or even the body and many more.