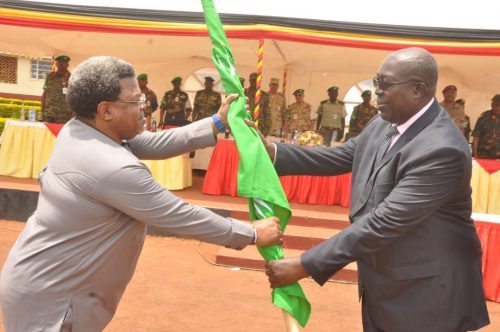 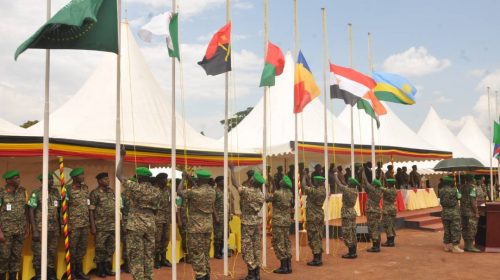 African militaries under the umbrella of African Capacity for Immediate Response to Crises (ACIRC) Volunteer Nations passed a test of their capability to rapidly deploy within seven days in Defence of any African country against any threat. This message was echoed by the Minister of state for Defence in charge General Duties Hon Charles Okello Engola who was the chief guest at the closure of a one-week long training exercise by thirteen African countries code named “Utulivu Africa IV”.

The head Peace and Security Division of the AUC, Mr Sivuyile Bam on behalf of AU commended Uganda for a job well done and thanked participating countries for exhibiting the spirit of volunteerism as one of the core values of ACRIC. “Africa is steadily becoming self-sustaining in order to deter any threat amongst its member nations. Exercise Utulivu Africa iv has shown the possibility self-reliance and AU is ready to solder all its responsibilities in support of the ACRIC cell” he added.

Maj General Peter Elwelu the Commander Land Forces who represented the CDF emphasized on the timeliness of the exercise that matches with Africa’s readiness to defend itself against a looming ruthless monster enemy who often times is disguised. “With the continued discovery of enormous natural resources and abundant minerals on the continent, we should expect engineered conflicts to occur from those who want access to them” he added. The CLF commended the spirit of African togetherness and called on other African countries to strengthen the ACIRI initiative so as not to allow evil forces to take control of Africa again.

According to the exercise Director, Maj gen Nakibus Lakara, Utulivu Africa(UA) IV 20I8 is the fourth CPX conducted by the African Capacity for Immediate Response to Crises (ACIRC) whose purpose is to prepare ACIRC Forces for future intervention operations in line with Article 4 (h) and 4 (J) of the African Union Constitutive Act.

This exercise was preceded by UA I CPX 2014 held in the United Republic of Tanzania, (FTX AMANI AFRICA II 2015 in the Republic of South Africa where ACIRC VNs showed a very presence), UA II CPX 2016 held in the Republic of Angola and UA III 2017 CPX held in Kigali, in the Republic of Rwanda. UA IV CPX 2018 is held under the theme “African Solutions to African Problems”. In this regard, ACIRC VNs in a unity of purpose, commit their own resources and capability for a common goal. He implored the present observer nations of Burundi, Ethiopia, Malawi and South Sudan to join ACRIC as soon as possible.