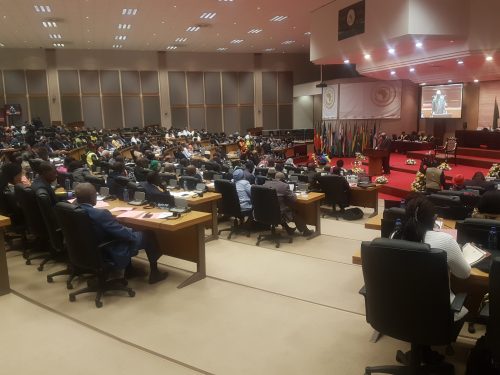 MIDRAND, SOUTH AFRICA: The sixth ordinary session of the fourth Pan African Parliament (PAP) has opened, Monday, in Midrand, South Africa, with the swearing in of 72 new MPs to the continental legislature.

The session, under the theme, “Winning the Fight against Corruption: A Sustainable Path to Africa’s Transformation,” is running from 7-18 May 2018 and will discuss the role of Parliament in realising health and achieving health targets for Africa. The MPs will also deliberate on issues of press freedom; the report on the African Union on combating corruption and the report on action on albinism in Africa.

The current term of the PAP will also lapse this session and there will be elections for President and Vice-Presidents, who will serve as Speaker and Deputy Speakers respectively. The PAP Vice Presidents represent the four regions of Africa.

In addition, elections for leadership of the Parliament’s committees, regional caucuses, women’s caucus and youth caucus will also take place.  Elections will be for a three-year term.

While officially opening the Session, PAP President Roger Nkodo Dang called on nation states to ratify the Malabo Protocol, which he said would be a stamp of faith in the African Union’s vision for Africa.

“The attendance of 53 states out of 55 Members of the AU augurs well for the African parliament. I am however, concerned that member states don’t want to ratify the Malabo protocol,” he said. He added that he was hopeful that solutions would be found for the PAP to exercise full legislative authority.

It was envisaged from the onset that PAP should evolve into an institution with full legislative powers, whose members are elected by universal adult suffrage. The PAP needs 28 ratifications by member states to give it full legislative powers, presently, the PAP exercises consultative and advisory powers since it was established in 2004. Its Members are elected or designated from the legislative organs of their respective Member States.

Among the guests who graced the official opening ceremony were the African Union Commission (AUC) Chairperson, Moussa Faki Mahamat. He urged nation states to put words into action and ratify the various instruments of the AU.

Mrs. Naye Anna Bathily, Head global parliamentary engagement at the World Bank Group asked legislators to discuss policies and enact legislation to promote youth employment. She said technology, globalization and climate change were impacting work on the globe and that MPs have a crucial role to play in developing policies and legislation for employment.