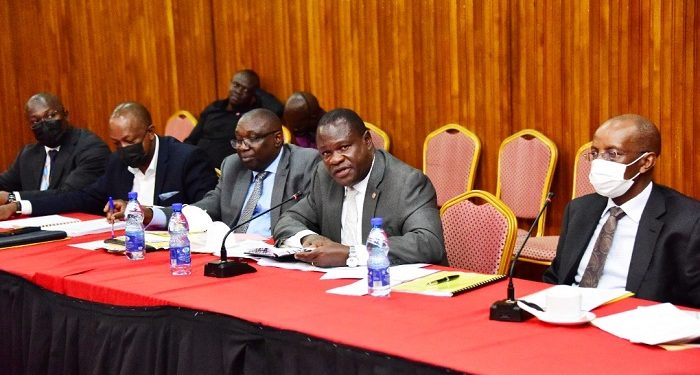 PS Ocailap Admits Approval of 10bn in Error.
The deputy permanent secretary for the Ministry of finance who doubles as the deputy secretary to the Treasury Patrick Ocailap has conceded before COSASE that he approved in error the controversial 10.7bn supplementary budget which was requested by the former lands minister Betti Kamya compensation of contested claimants.

COSASE also quizzed the former Permanent Secretary of the ministry of finance Keith Muhakanizi over the same scam which he distanced himself from.

The former Secretary to the treasury Keith Muhakanizi has today appeared before the parliamentary committee of Commissions, Statutory Authorities, and State enterprises to explain his part in the approval of the controversial Shs10.6bn that was irregularly initiated by the former Minister of Lands Beti Kamya to pay off six claimants of whom some are said to be ghosts. From the onset, Muhakanizi distanced his name from the scam, saying he was away when the supplementary was processed.

Muhakanizi also faulted the process of approving the 10.6bn supplementary, saying it was not in conformity with the Public Finance Management Act.

COSASE then turned guns to the Deputy Secretary to the treasury Patrick Ocailap , who also deputized Muhakanizi then, and questioned him over the matter. Ocaliap who labored to justify his actions using the constitution, ran short of words to convince the committee.

Ocailap later conceded and apologized that he approved the irregular supplementary budget in error because he did not see the said presidential directive that was quoted by the former Minister Kamya now IGG in requesting the ministry of finance to avail funds for the six claimants without knowledge of the accounting officer of the spending agency.

The Shs10.6bn was used to compensate beneficiaries who included Kasiya Rwabukurukuru (6.43bn) for land at Kiyunga in Sheema District, and Stephen Peter Nagenda of Kibaale who received Shs1.06bn, Julius Busuulwa who received Shs(1.4 bn) Natalia Namuli who received Shs1.6bn, Yisaka Lwakana (125.3 million), and Mugisha Geoffrey who received Shillings 1.49 billion for land at Buyaga in Kibaale District. But the Auditor General notes that some claims were unverified, yet there was an overpayment of over 400M.