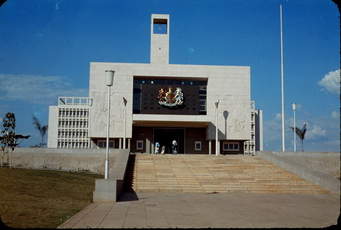 The PAC has castigated the Uganda Virus institute for executing donor projects worth 21bn shs outside the budget of the republic of Uganda.

The projects in question were conducted in the financial year 2016/2017 but they were never audited by the auditor general since the funds were never declared in the policy statement.

The matter came to light while officials from the institute led by the director Pontiano Kalebu were interfacing with MPs on the committee this morning.

The chairperson of the committee Nandala Mafabi quizzed the officials on why the money was never included on the budget.

Kalebu noted that the funds were off budget receipts for activities run by donors outside the authority of the institute.

This response led to more queries from MPs including the Masaka municipality MP Mathias Mpuuga who wondered whether the institute has any absorptive arrangement for grants which mandates donors to account for funds spent through the institute. He quizzed Kalebu on whether there is an MOU signed with donors stipulating the obligations of the parties.

The Bunyole west MP James Waluswaka argued that all funds expended through the institute for budget support by donors effectively become government funds.

In his defense Kalebu noted that the institute has memoranda in place for donor projects which have to fall into the work plans of the organization. He, however, said that donors prefer to run separate accounts and hire separate auditors.

Nandala Mafabi pointed out that all the money coming into the budget must be with the knowledge of the finance minister. He told Kalebu that all funds must be included in the budget to avoid the illicit flow of money.

The committee has demanded that the institute provides by Friday all the audited accounts for the projects, the memoranda signed with the donors and reasons as to why the money was excluded from the accounts.