UPPA Sacco Kicks Off With 13 Million Shillings For Devt. 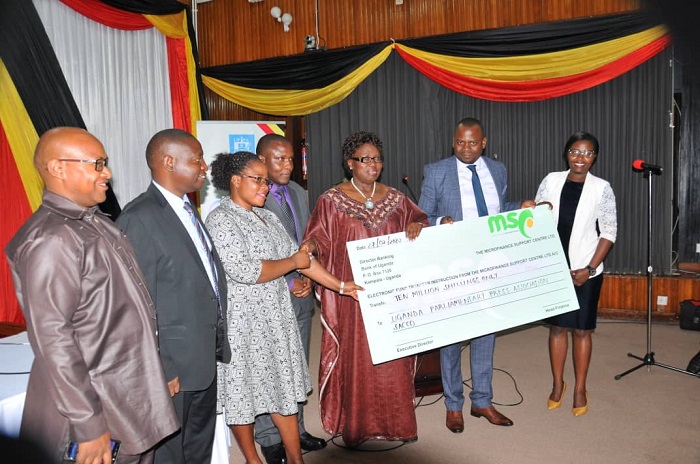 UPPA SAACO KICKS OFF WITH THIRTEEN MILLION SHILLINGS FOR DEVELOPMENT

The Speaker of Parliament, Rebecca Kadaga has launched the Uganda Parliamentary Press Association (UPPA) SAACO as she encourages the members to think of superior investments other than lending and borrowing.

Kadaga appreciated the move by journalists to form a saving group noting that it is the only way they can supplement their scanty earnings in the various media houses.

She encourages journalists to have bigger plans for investment. The Speaker contributed Shs3million to help kick start the SAACO and pledged for constant support as the patron of the savings group.

There are 300 Uganda Parliamentary Press Association journalists who cover various issues at parliament.

In her remarks, the chairperson of Uganda Parliamentary Press Association SACCO Suzan Nawoonga called upon the various stakeholders to give a hand in nurturing the newly born SACCO.

Nawoonga further urged journalists to have a heart of saving that is when we shall have relevance in SACCO.

Nawonga promised frugality and transparency to all members.

Hon David Bahati Minister of State for Finance, Planning and Economic Development Hon David Bahati , said the government will continue capitalizing the Uganda Development Bank (UDB) and urged the Sacco to cash in on its low-interest loans.
He cautioned the journalists against bad-mouthing tax measures which he said is the only way to grow the economy and bridge the tax to Gross Domestic Product (GDP) ratio which is now at 13.5 percent.

Bahati said that as Uganda we are now at 13.5 percent of GDP; we need money to provide services as a response to the UPPA President Moses Mulondo who had requested to scrap off the OTT.

Hon Haruna Kyeyune Kasolo, the Minister of State for Microfinance said a poor journalist is a danger to the profession pledging support to the budding Sacco.

Kyeyune stated that they will support the Sacco by extending support in terms of training, workshops, capacity building and any other form of technical support.

The function was graced by various stakeholders including Members of Parliament heads from Uganda Journalists Association, Media Council, and Human Rights Network for Journalists in Uganda among others.

Human Rights Network for Journalists in Uganda CEO Robert Ssempala advises journalists to poses the habit of saving that is when they shall be able to overcome the issue of minute payments.

Member of Parliament Cyrus Ogwal who represents the people of KUMI calls upon the journalists to save before utilizing the donated amount that is when it shall gain from the Sacco.

He also asked journalists to make the (SACCO) their entry point to various businesses that is when they will benefit from it.