Last year, reports emerged pinning lecturers at Makerere university of sexually harassing female students in exchange for marks. This forced the university administration to institute a commission of inquiry into the matter.

This led to a few lecturers dismissed from their work.

Dr. Maxime says, there not many universities around the world that have done such a brave thing Makerere did.

However, the manager communications and international relations makerere university, Dr. Muhammed Kigundu says, as an institution they believe in zero tolerance to sexual harassment of students by lecturers and students too.

The committee set up to investigate these cases had completed and submitted a report on Mr Medard Twinobuhungiro and Mr Jackson Sekiryango while investigations on Mr Vincent Ssajjabi are still on-going. Management is studying the report and will handle in accordance with the Policy and Regulations against Sexual Harassment of Makerere University. Says the university administration.

This at a press conference where they announced the Geopolitics conference slated for 17th and 18th of this month at Makerere University to discuss global, regional economic, social and political issues.

EC Speaks Out On The Recently -Concluded By-Elections 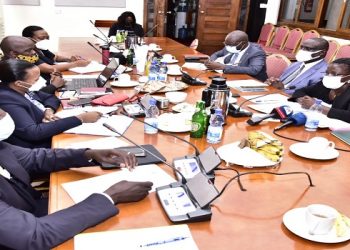