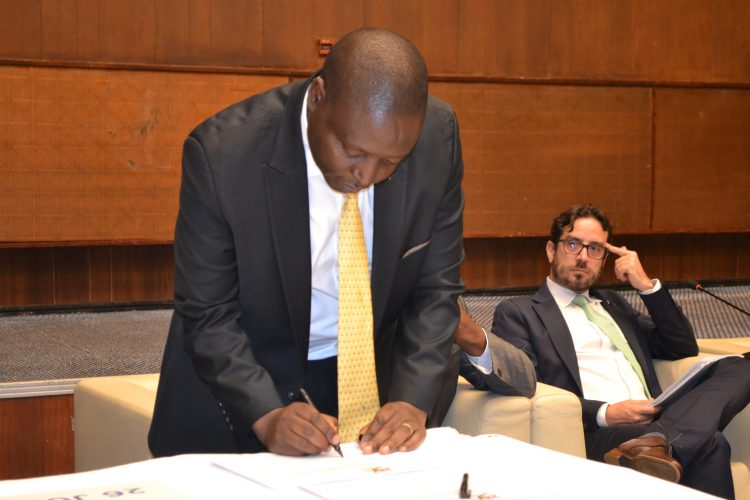 Uganda today has registered a milestone in the environment sphere as being the first African nation to sign the nationally determined contribution towards addressing climate change impacts as a way to fulfill the 2015 Paris agreement.

The nationally determined contribution plans are part of the national strategies the country will implement to see that it combats the negative effects of climate change among them being, floods, famine, landslides, and diseases among other which have for years left scars in the country with over six million people left feeling the brunt of the disasters.

Officiating at the signing ceremony and launch of the plans, the 1st deputy premier, Gen. Moses Ali recognizes the fact that climate change remains a pressing challenge to Uganda of the time as witnessed through regular effects by multiple disasters.

However, the water and environment minister, Sam Cheptoris confirms that the signing shows uganda’s political commitment to addressing climate change through national prioritize.

The state minister for finance, Hon. David Bahati raises fears that the continuing adverse effects of climate change Uganda continues to witness will greatly contribute to biting poverty among Ugandans.

Bahati while closing the high level meeting on Uganda’s climate plans and ambition today in Kampala states that Uganda being a country that heavily relies of climate for her daily well being, people find difficulties to attain their economic goals when poor climate conditions sweep the whole country.

But the chairperson parliamentary forum on climate change, Hon. Biyika Lawrence Songa wants the NDC plan and partnership benefits the economy, calling for a graft free environment for it to register success.

The chairman, national planning authority, Dr. Kisamba Mugerwa says, govt is committed to addressing issues of climate change as witnessed in the development plans which have the element of climate change.

Development partners among them, UN bodies, world bank, local NGOs, foreign missions report their commitment to lead in the support of these laid down plans by govt to see that the country fully realizes her goals in combating the climate change monster.

In the year 2010/11, drought alone cost Uganda USD.1.2Bn, equivalent to 7.5% of the country’s gross domestic product hence causing a huge set back to the national economy.
END-