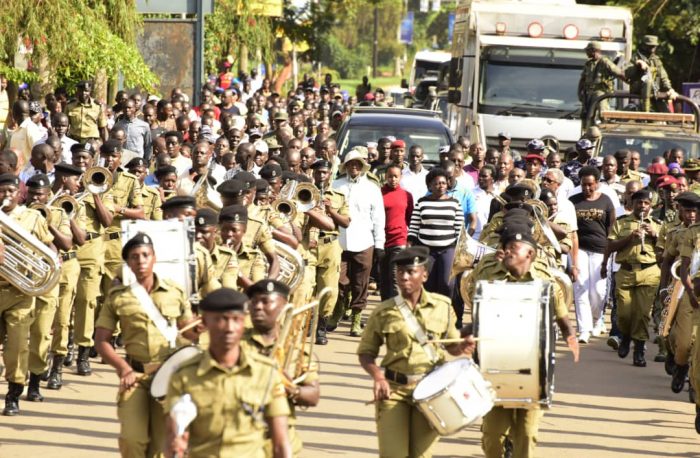 President Yoweri Museveni today morning participated in the activities to mark the 2nd National Physical Activity Day that was flagged off at Kololo Independence Ceremonial grounds in Kampala. The Physical Activity Day aims at informing the population in the country of the importance of physical activity and its relevance in fighting Non-Communicable Diseases (NCDs).

As part of the activities, President Museveni led a section of Ugandans in a 5-kilometre walk around Kampala highlighting the need to fight Non-Communicable Diseases that he said are the leading cause of death of many people in the country and worldwide.

“Non-communicable Diseases are diseases which are not due to infections. They come because you have abused your body,” he said.

Today’s activity Day ran under the theme ‘My Health, My Responsibility’. He called on the health fraternity in the country to explain to the public what the Non Communicable Diseases mean by translating their names in all local languages so that the public is sensitized on the dangers and how to overcome them.

According to Globocan, 32,617 new cancer cases occurred in 2018 as 21,829 people died of the diseases in the same year. 1 in every 4 adults has high blood pressure. A survey by the Uganda Non-Communication Diseases reveals that 2 out of 100 Ugandan adults suffer from diabetes.

“You have heard that it is clear fatness is abnormal. You are not supposed to be fat; you are supposed to put in the body equal amount of what we use in terms of food,” he advised.

He cautioned the people about the use of tobacco, excessive alcohol and drugs among others so that there is reduction to the dangers of the NonCommunicable Diseases.

The President later launched a book titled ‘Presidential Initiative on Healthy Eating and Healthy Life Style.’ The book has all the necessary information for the public to live healthy lifestyle.

Health Minister, Dr. Jane Aceng, thanked the President for prioritizing health saying that his participation in the exercise sets a thrilling example for all Ugandans to emulate. She emphasized the essence of physical activity in the reduction of Non-Communicable Diseases, leading to healthier and more productive population that contribute to overall national development.

According to reports, Non-Communicable Diseases constitute a major public health in Uganda. Although the current mortality due to the four major NonCommunicable Diseases – cardiovascular diseases, various cancers, chronic respiratory diseases and diabetes – stands at 27%, the percentage is expected to rise in next decade if no steps are to combat the ailments.