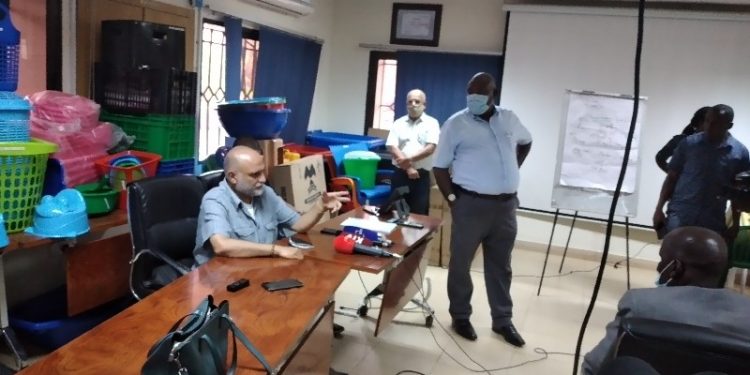 Mukwano Industries have asked the government to withdraw the 10% excise duty which was slapped on the crude palm oil in order to cushion escalating prices of soap and other commodities.

The plea was made to the parliamentary committee of Trade which went on a fact-finding mission crackdown on fuel stations in Kampala,  selling adulterated fuel.

The parliamentary committee of Trade and tourism together with the UNBS and the ministry of energy launched an operation on fuel stations within Kampala Metropolitan areas.

The committee traversed city petrol stations and closed two of them including Fuelx Busega and Marino Matugga which were found with contaminated petrol. Workers were also arrested after managers vanished.

After the crackdown on Fuel stations, the committee proceeded to Mukwano group of companies to establish the cause of price hikes of Common user commodities.

They have attributed the hike in soap and other products to the international high price of raw materials.

The General Manager of Mukwano  Industries Mr. Businge Rwabwogo explained that in addition to the high prices of raw materials, the freight rates have also skyrocketed from 1500 dollars to 6,000 dollars per container to Kampala, as well as raw materials like palm oil from  750 – 1500 U.S dollars per metric ton hence the hike on soap and other products in the country.

He added that the demand for palm oil is high and yet supply is low because Malaysia and Indonesia the largest producers of palm oil were heavily affected by Covid- 19 lockdown, which affected harvest putting pressure on the production of sunflower.

To make matters worse the company also decries the scarcity of sunflower a substitute to palm oil which has been caused by the Russian Ukraine war, saying they have been importing much of the raw materials from Russia and Ukraine the leading producers of sunflower,Rwabwogo noted.

Worldwide 47,347,175 tonnes of sunflower are produced per year. Ukraine is the largest sunflower producer in the world with 13,626,890 tonnes of production volume per year. Russian Federation comes second with 11,010,197 tonnes yearly production.

However, Mukwano says their soap is produced at Ushs5900 a bar, wondering why some retailers are selling a bar as high as Ushs10000.

Mr.Alykhan Karmali the managing director of Mukuwano industries said in order to alleviate the situation government should reduce the cost of water, power, and also remove the 10%  duty tax for import of raw materials on the manufacturers to increase production.