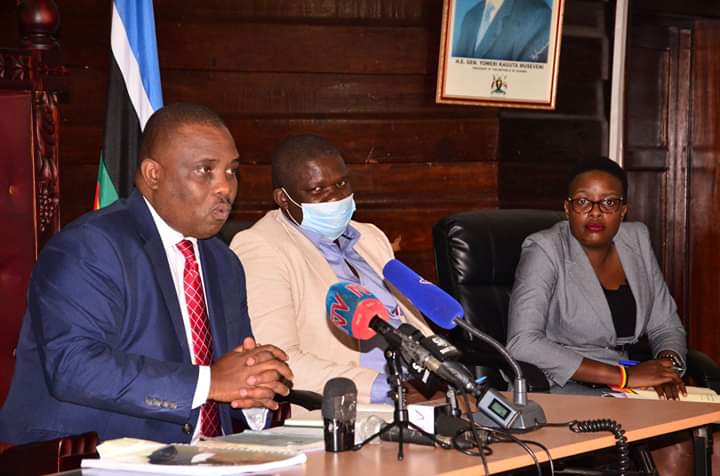 The meeting Chaired by the Lord Mayor Erias Lukwago, arrived to a conclusion after a thorough assessment of the COVID-19 pandemic and its related effects and resolved that it is no longer viable to meet the KCCA Budgetary projections. The total KCCA Budget is 521Billion and out of the same, approximately 100Billion is expected to be generated from Local Revenue. Apparently, many city businesses need a jerk start and it may not be proper for KCCA to impose taxes during a time when these are struggling therefore it is resolved that;
1. Trade Licenses be suspended up-to 31st December 2020 and this grace period will enable the business community to get back to business.

2. Market dues be suspended up-to 31st December 2020. The Executive noted that majority of the urban poor ply their goods in the markets and they have equally suffered the consequences of COVID-19.

3. Commercial User fees be suspended up-to 31st December 2020. There was a proposal by the Minister to re-introduce commercial user fees for the taxis and boda-bodas in the City. The KCCA Executive body resolved that it would be ridiculous to levy fees from these bodies which have been out of business since March 2020.

Accordingly, these Cabinet Resolutions are going to be submitted in the Council by the Minister of Finance because the City Executive is duty bound to initiate policies and forward the same for the Council’s ratification in line with the law. The KCCA Budget will be scaled down and the Minister of Finance has been tasked to sit down with the Executive Director to work out the modalities of effecting this.

STREAMING PROCUREMENT AND DISPOSAL PROCESSES WITHIN KCCA.*
The Cabinet also realized that the Institution is faced with a huge crisis where it is currently operating without regulated procurement processes. The Amended KCCA Act repealed Sections 61-70 of the Parent Act which initially regulated the City Procurement and Disposal processes. However, this needs to be addressed as a matter of urgency by using the existing KCCA Act which provides a remedy in Section 5(4). And accordingly, in line with Section 17(d) of the Local Governments Act, the seven members of the Tender Board will be presented to the Council for approval as premised in Section 91 of the Local Governments Act.