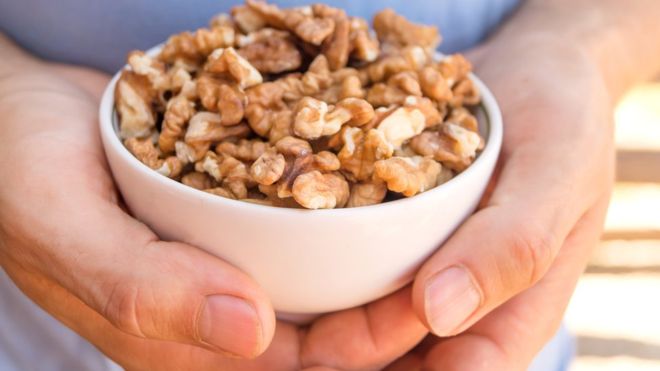 Men who ate about two handfuls of mixed almonds, hazelnuts and walnuts daily for 14 weeks improved their sperm count and had more viable “swimmers”, scientists found.

The study comes amid a decline in sperm counts across the Western world, linked to pollution, smoking and diet.

Researchers said there was growing evidence a healthy diet could boost the odds of conceiving.

About one in seven couples have difficulty getting pregnant and about 40-50% of cases of infertility are attributable to men.

Sperm drop ‘could make humans extinct’
‘Healthiest hearts in the world’ found
The scientists randomly divided 119 healthy men between the ages of 18 and 35 into two groups:

One added 60 grams (2oz) of nuts a day to their normal diet
One made no changes to what they ate
Image copyrightGETTY IMAGES
Those in the nut group improved sperm:

count by 14%
vitality by 4%
motility (movement) by 6%
morphology (shape and size) by 1%
All of these are the parameters the World Health Organization lists as measurements of sperm quality and are associated with male fertility.

Experts said the study backed up others that showed a diet rich in omega-3 fatty acids, antioxidants and the B vitamin folate improved fertility.

Nuts contain many of these and other nutrients.

“Evidence is accumulating in the literature that healthy lifestyle changes such as following a healthy dietary pattern might help conception,” said Dr Albert Salas-Huetos, from the Universitat Rovira i Virgili, in Spain, who led the study.

‘Interesting academically’
However, researchers cautioned that these men were healthy and apparently fertile, so it was not clear whether the findings would apply to the wider population, including men with fertility problems.

Allan Pacey, professor of andrology at the University of Sheffield, who was not involved in the research, said it was also possible that men in the nut group might have made other positive changes to their lives not taken into account by the study.

Dr Virginia Bolton, formerly consultant clinical embryologist at Guy’s Hospital in London, said the findings were “interesting academically” but it was impossible to say what effect they would have in terms of boosting the chances of pregnancy.

She added: “But meanwhile, until we get the answers to the questions, we should all be encouraging all of our patients to stop drinking alcohol, stop smoking, eat healthily, all of the standard things.”

The results of the study are being presented at the annual meeting of the European Society of Human Reproduction and Embryology in Barcelona.