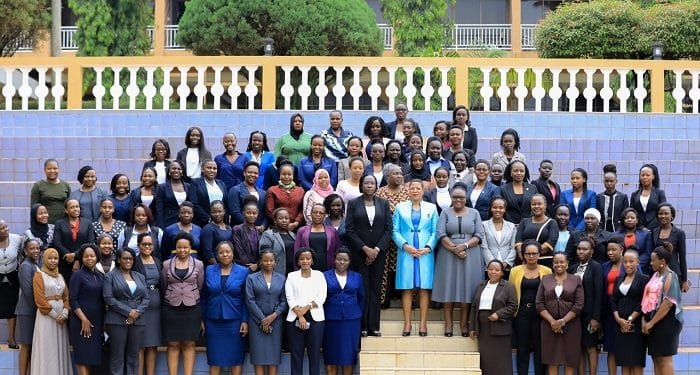 Among Implores Employers- To Safeguard Women Against Sexual Harassment.

Speaker of Parliament Anita Among has called upon employers to safeguard against sexual harassment in the workplaces that is usually perpetuated by men against women. She noted that no woman should have to tolerate such a conduct as it violates the respect and dignity of the victim.

She made the remarks during a meeting with female staff of parliament at Hotel Africana in Kampala on Monday 16th, 2023, where she implored them to speak up against any form of sexual harassment that they experience at work.

“Parliamentary Commission has a fully-fledged anti-sexual harassment policy enshrined in Section 9 of the Parliamentary Service Human Resource Policy Manual. Am disappointed that such a vice is still existent,’’ she said, adding that: “Aware that women at the workplaces face unique realities, there is need for us to openly deliberate upon such issues to make our workplaces a better environment for us all.’’

She discerned that such flagrant acts are usually in form of unwelcome sexual advances, promises of rewards and favors, sometimes taking even wilder forms devoid of requests for sexual favors but forms such as verbal or physical harassment of a sexual nature.

“Today’s meeting is a wakeup call to you all, including other workplaces, to condone sexual harassment. Let us fight this iniquity together. Vices of this nature strive when victims keep quiet. It therefore requires us to be open about it so we can confront it and its perpetrators head on. My position is steadfast and clear; No person is too powerful to be confronted. Feel free to approach me or a colleague you are comfortable with and report any form of sexual harassment you are suffering,” she asserted.

Ms. Among expressed firm commitment to address the issue of sexual harassment that has impeded access to equitable treatment and opportunities in employment..