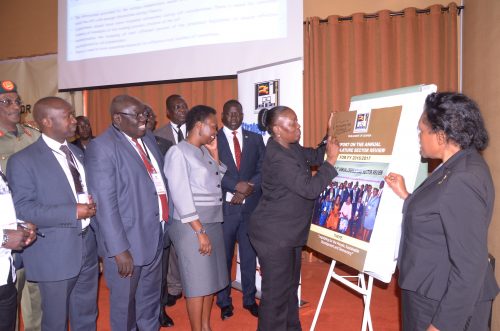 The Speaker of Parliament, Rebecca Kadaga, has called for public involvement in the law making process instead of stampeding the legislature at implementation stage.

Citing the United Kingdom where the public is consulted before Bills are presented before Parliament, Kadaga said that in Uganda public participation remains limited and called for more engagement with the constituents.
The public does not fit into our work yet. We do not necessarily have to consult everyone but we can take samples from different parts of the country so we have a voice of the people in the process, Kadaga said.

The Speaker made the remarks while presiding over the opening of the Second Annual Legislature Sector Review at the Speke Resort, Munyonyo, Thursday, 20 September 2018. The review is being held under the theme, Legislating for sustainable development.

She added that an application that is being designed by Parliament to track the work of committees will enable public engagement in the legislative process.
This app will now facilitate the public to comment on the Bills especially after First Reading because it is difficult for them to get involved at Second Reading, she added.

Kadaga said the influence of the Executive in the final decision making processes hampers the delivery of work of Parliament and hence affects its independence.
The separation of powers is very crucial in providing checks and balances, she said adding that, this calls for government institutions to take action and act on recommendations as per the discussed reports in order to improve accountability and service delivery.

Lwemiyaga MP, Hon Theodore Ssekikubo, welcomed the idea of involving the public in the law making process citing the recent passing of the Excise Duty Bill, which introduced tax on mobile money transactions that was not received well by the public.
If these consultations are done before passing of the Bills, it will save us the embarrassment. The views of the public can be incorporated before government brings the Bills for consideration, Ssekikubo said.

The Clerk to Parliament, Jane Kibirge, said the review is held to identify strong areas of performance and areas for improvement with the aim of informing the planning process of the next financial year.

At the sector review, Parliament is carrying out a self-assessment exercise. In 2008, the Inter-Parliamentary Union developed a self-assessment toolkit to assist parliaments assess their performance against widely accepted criteria for democracy and governance.

The self-assessment will assist Parliament to undertake an analysis of its performance during the third session of the 10th Parliament. This will lead to the identification of strengths, weaknesses and formulation of recommendations for reform and development. The report will then be presented to the IPU Secretariat by the Speaker.

The sector review is attended by Members and staff of Parliament, development partners and officials from the National Planning Authority.

We Escorted Bobi Wine To His Home Peacefully -Police