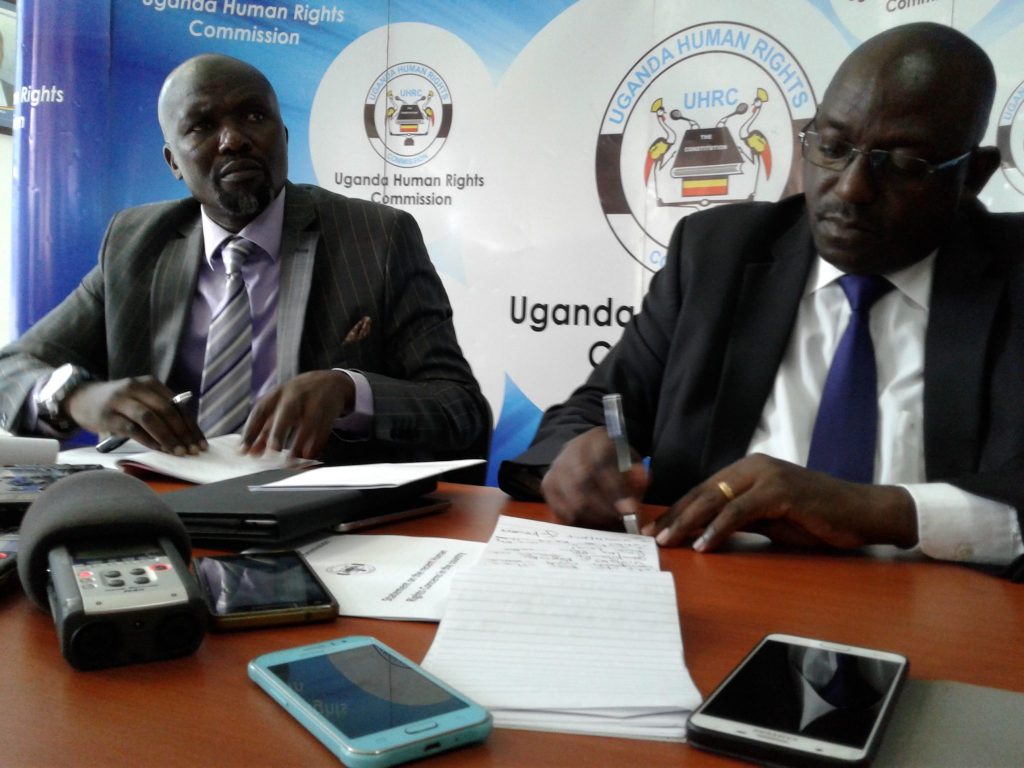 Uganda human rights commission confirms recording 190 human rights violation complaints in the period September to October this year with most of these cases related to police long hours detentions, brutal arrests during the ongoing article 102(b) consultative meetings across the country.

According to the deputy chairperson at the commission Hon. Meddie Mulumba, 65 complaints are being handled at tribunal level with others yet to be handled confirming that all cases if concluded then victims are to be compensated and perpetrators punished.

The commission further castigates police for taking sides while enforcing orders during the consultative meetings held by factions opposed to the age limit amendment and on the other hand offering security to those supporting the amending of the article something the rights body says is unconstitutional adding that its greatly concerned with unclear role that the Uganda police has assumed in regulating consultations regarding the age limit bill and begs that this should stop.

Still the commission condemns the detention of opposition leaders Dr. Kizza Besigye, Ingrid Turinawe and Patrick Amuriat among other citizens beyond the mandatory 48 hours as provided for under article 23(4)(b) of the constitution adding that this has spread country wide due to the current sit down strike by prosecutors and many places of detention are currently overcrowded with suspects as a result of courts not operating and now the commission asks that government finds a lasting solution to these problem for suspects to access justice very fast.

Now with all this happening, the commission is considering holding a stakeholders meeting with security organs bosses, prime minister, president, religious leaders, political leaders, speaker of parliament and Civil Society Organizations to discuss the current matters to come up with solutions to the problems.

Further, the commission reveals that it has already started investigations into the unfortunate killing of Edson Nasisara which happened last week in Rukungiri where police was dispersing the crowd which had come to attend a rally organized by Forum for Democratic Change presidential candidate Hon. Patrick Amuriat to gunner support so as to assume party leadership.

Amuriat was later joined by former party president and four times presidential aspirant Dr. Kizza Besigye and party mobilizer Ingrid Turinawe with a huge crowd later turning the rally into a consultative meeting for the anti age limit forcing police to use live bullets and tear gas to disperse the crowd which saw Edson Nasasira loss his life with postmortem reports confirming Nasasira to have died as a result of bullet wounds though police earlier had released a report indicating that he was stoned to death by un unknown member from the crowd.

For the past couple of months the country has witnessed a series of running battles between police and those opposed to the lifting of the age limit in the districts of Mukono, Lira, Gulu, Kalungu, Jinja, Iganga, Mbale, Buguri, Rukungiri, Arua, Kumi, Mityana, Kampala among other districts in the country.

Now the commission is urging police to desist from enforcing unlawful orders which result into using excessive force and also call upon those opposed to the lifting of the age limit to follow lawful means as they hold their consultations to avert chaos that comes along when police tries to enforce order.