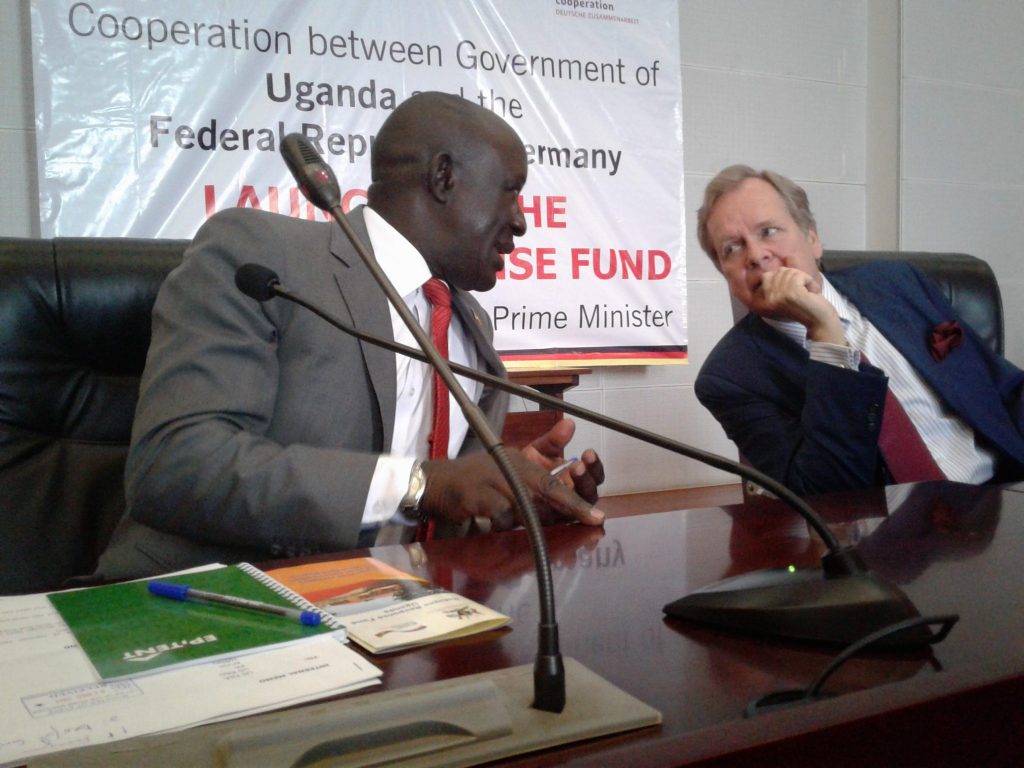 The Germany ambassador to Uganda is asking political leaders from Africa to exert more pressure on presidents of S.Sudan and DR Congo compelling them to settle issues that have led to the continued fighting in their respective nations.

Speaking at the launch of the refugee response fund today at the prime minister’s office in Kampala, where Germany donated Euros 10M, H.E. Dr. Albrecht Conze stressed that if nothing is done by the AU and IGAD member states then conflict in these countries is likely to escalate giving a rise to refugee in host countries like Uganda.

He further applauds Uganda for the responsibility taken to host refugees from all neigbouring nation saying that this should serve as a learning lesson to all African states.

The state minister for disaster and refugees, Hon. Musa Ecweru notes that the influx of refugees has put more pressure on the already over burdened basic infrastructure and social services seeing 23.4% of the host communities in westnile lacking access to improved safe water sources with many settlements not meeting the globally recommended minimum emergency standards for drinking water.

And this calls for support from all parties to attend to the ever emerging crisis in the area.

However, Yumbe district vice chairperson, Hon. Aniku Saidi confirms that resources in the district and the region as a whole are highly stretched that the population both for the citizens and refugees can not afford receiving better services and now calls on partners to consider raising permanent structures to host health centers in the district as the current ones are make shifts.

Of the Euros 10M donated by Germany govt, Oxfam and save the children are each going to use Euros 3.9m to implement water and sanitation programmes as well as set up better classrooms for the communities in the districts of Yumbe and Adjumani targeting to serve over 150,000 refugees and host communities.

In Arua district is Rhino camp where the water and sanitation project is to be implemented by Oxfam Uganda with the project aimed at increasing water access for 45,000 people and Oxfam will drill high yielding boreholes and also extend water distribution systems coupled by providing drainable latrines in schools and health facilities for 13,250 people.

Then Save the children will support the education system in Bididi camp (Yumbe district) to enable conflict affected and host community children enjoy their right to education. The project will also increase access to quality learning spaces and learning opportunities for 25,700 girls and boys by providing schools with additional classrooms and strengthen the local communities’ commitment and capacity to maintain school structures. This will also reintegrate children that have been out of school for a longer time into the education system.

Uganda currently hosts over 1.5m refugees with this support coming to beef up the call made by president Yoweri Museveni in the June solidarity refugee meeting which was held in Kampala this year.