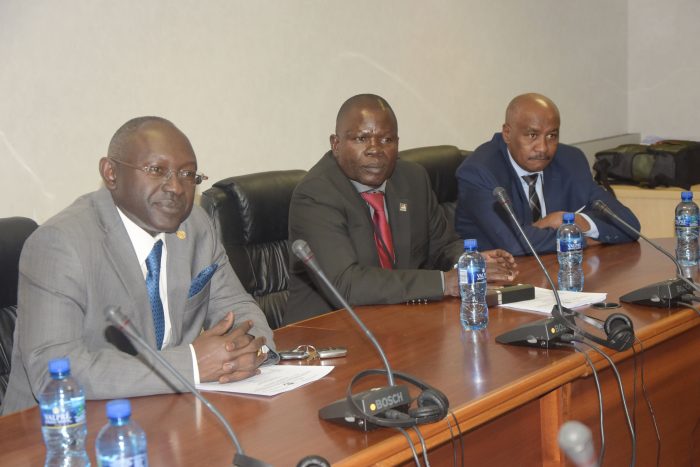 Push gov’t to ratify PAP Protocol, Ugandan MPs urged The Pan African Parliament has appealed to Ugandan legislators to push government to sign and ratify the Malabo Protocol that would give the continental institution full legislative powers. The African Union Heads of State Summit sitting in Malabo, Equatorial Guinea in 2014 approved an amendment to the Protocol that establishes the Pan African Parliament, which now requires ratification by at least 28 member states for it to come into effect. The appeal was made during a meeting between the Clerk to the Pan African Parliament, Mr. Yusupha Jobe and the Head of Committees and Research, Mr. Nassir Galal, and visiting members on the House committees on Legal and Parliamentary Affairs and Government Assurances. The meeting was held at the Pan African Parliament in Midrand on Monday, 13 May 2019. The members were briefed about the establishment, structure, functions and challenges facing PAP. “We are still struggling with the ratification process. We want the visiting members to get government of Uganda to ratify the Protocol and have PAP become a legislative body carrying out duties as designated by the African Union,” said Mr. Galal. The delegation comprises: Hon. Clement Ongalo Obote, Hon. Gaster Mugoya, Hon. Paul Akamba, Hon. Alex Byarugaba, Hon. Rose Lilly Akello, Hon. Aogan Silas, Hon. Pius Wakabi, Hon. Patrick Kasumba and Hon. Betty Awor. Hon. Silas wondered what PAP was doing to speed up the ratification process considering the low response by member states. Hon. Mugoya questioned if the Protocol, as approved by the AU Heads of State, contains powers to compel member states to respond to matters of national or continental importance. The Leader of the Ugandan delegation, Hon. Ongalo, said there was need to follow up the ratification of the protocol with the relevant government department, and that there was need to protect PAP serving members to retain their seats in Midrand following national elections. Mr. Galal said that only 12 of the required 28 ratifications have been secured from AU Member States. He said that the AU and other organs of the AU are still holding onto functions meant for the Assembly including budgeting. “We managed to have the PRC [Permanent Representatives Council] present the budget before PAP for two years, but after that they started claiming that they are not ready, leading to delays,” he said. Mr. Galal said that the constant change of composition also remains a challenge, as PAP has to swear new members every session, following elections held at different times in different countries. He however said that some PAP members may be against the proposal to have them lose their seats in

Kitatta To Spend 8 Years In Luzira.

Kitatta To Spend 8 Years In Luzira.