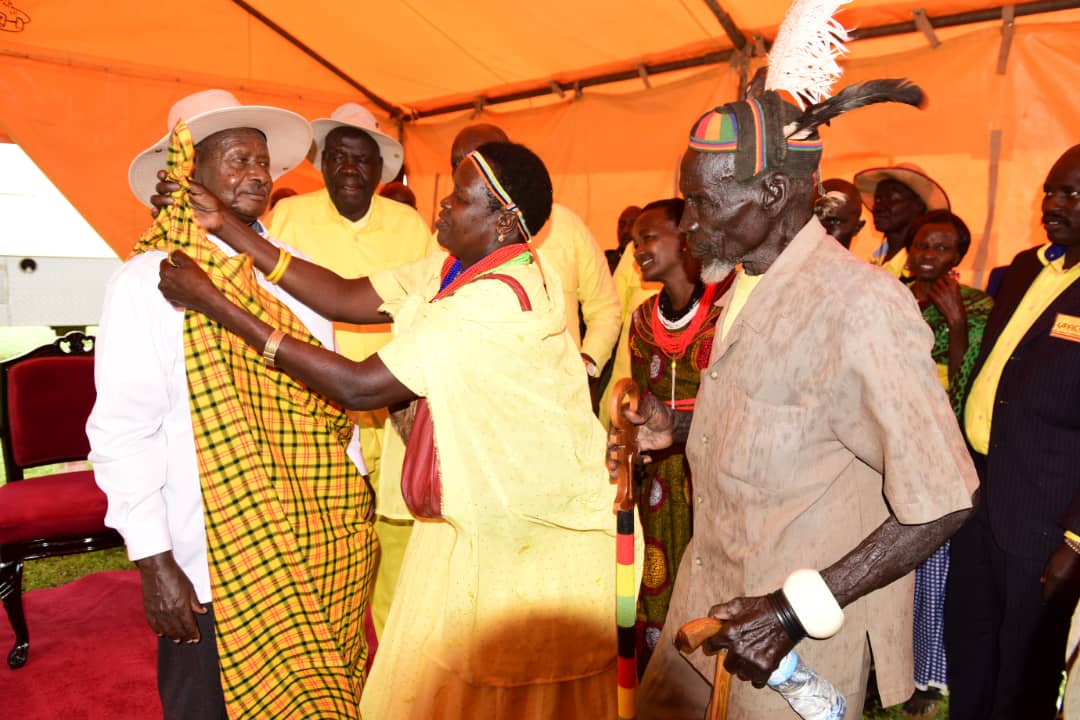 President Yoweri Museveni has said that government is determined to put an end to the seasonal water scarcity in Karamoja sub-region through building permanent dams to trap runoff water from the flush floods that are rampant during the rainy season.

“It is not true that Karamoja has no water. There is water here but it is seasonal. What we need to do is build the dams so that you don’t follow the water to Teso. Our biggest priority was ensuring peace and security by stopping cattle rustling, the next priority is water,” he said.

The President was addressing a public rally at Christ the King Church grounds in Lotaruk village, Lolachat Sub-county, Pian County in the new district of Nabilatuk in Karamoja Sub-Region.

Mr. Museveni is currently on a nationwide tour to promote the job and wealth creation campaign to ensure improved household livelihoods.

He advised the Karimojong to be keen on trapping rain runoff water and channel it to valley dams, adding that the floods caused by rain recently resulting in the washing away of a bridge on Lola chat River shouldn’t have happened if the rainwater had been trapped in valley dams.

Earlier, the Nabilatuk interim LC5 Chairperson, Mr. Lorukare Paul reported that the destruction of the bridge had hampered business and communication between Namalu and Lokapel villages.

Shortly after his address, a heavy downpour immediately started, stopping an intended visit by the President to the destroyed bridge.

The President said that the Movement government ushered in peace that brought political stability and enabled it to develop infrastructure such as roads, electricity, schools, and hospitals among others. He urged the people to take advantage of the infrastructure in place to embrace profitable modern agro production enterprises such fruits, poultry, piggery, coffee etc to generate income to eradicate household poverty.

The President said he was happy with the development trends that are taking root in Karamoja, adding that roads and electricity will be extended to the areas of Kotido, Karenga and Kidepo.

After his address, Karimojong elders Lomogini and Agness Aleper Luking as a sign of respect later decorated the President in traditional attire.

The Minister, Office of the President Hon. Esther Mbayo, commended the President for harnessing Karamoja to an area that has started attracting visitors.

The Minister for Karamoja Affairs, Hon. John Byabagambi, hailed the cooperation between the local leaders and the Central Government.

He said that the peace committees in the region have been supported with transport means including bicycles, motor cycles and cell phones to ensure that the peace ushered in by NRM government is consolidated.