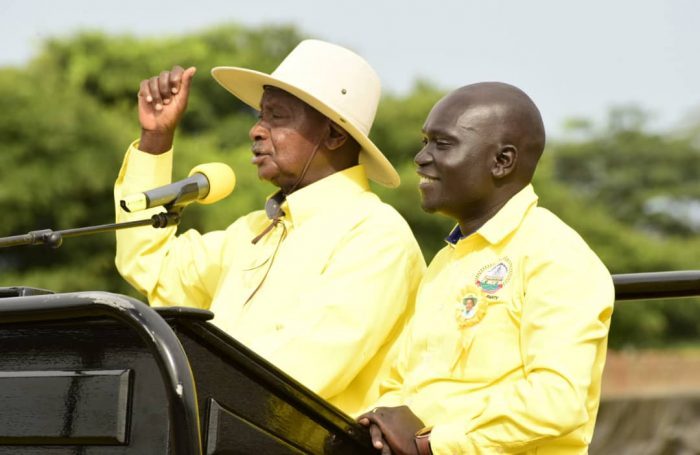 Candidate Urombi is the current District Youth Chairperson of Goli Mixed Primary School management committee in Nebbi and a Board Member for both Bethel Children’s Ministry (Atida) and Educhild Foundation of Uganda.
President Museveni who is also the National Chairperson of NRM, addressed two separate campaign rallies one at Alengu playgrounds in Parombo Sub-County and another at Nebbi Primary School in Nebbi Town. urged the people to vote for the NRM government because of the peace and development that it has brought.

The President, who observed a moment of silence for the late NRM Chairman Mr. Esrom Alenyo, noted that by voting for Emmanuel Urombi, they would be passing on the mantle to him to continue developing Nebbi like the late Alenyo.

“I thank you for voting for my late brother Alenyo. With him we were able to develop Nebbi from Zero to what it is now. Vote for Emmanuel so that he can continue the work of Alenyo,” he said.
He observed that voting for the opposition would deny the people of Nebbi District the change of working directly with him.

On the issue of peace brought by the NRM, President Museveni said that the people in Nebbi District were in the best position to understand the importance of peace since their neighbours in the Democratic Republic of Congo and South Sudan were suffering because of lack of peace.
“The young people should know what was happening in Uganda before the NRM came. I was also not there when Jesus was born but I am a Christian. Our Moslems here were also not there when Muhammad was around,” he said.

President Museveni was happy to note that the population in Nebbi District had increased because the NRM Government had brought immunization in the country. He also reiterated that there was progressive infrastructural development in the district because it now had 10 government-aided secondary schools and 15 private ones.

The President, however, noted that development and peace would not help them unless they also create wealth for themselves.  He added that people must create wealth for themselves through participating in calculative agriculture and carrying out fishing since they live near River Nile. He said that if they did this, they would be able to afford good modern life and also help employ other people.

“I recently talked to your leaders to teach you how to create wealth. I want you to live well. We don’t want six children sharing one blanket and fighting for it,” he remarked.

At the end of the campaign rallies, President Museveni met with the Boda Association of Nebbi District where he was endorsed as the sole NRM Presidential candidate for 2021. He had earlier toured Onyomu Pineapple Juice Factory where he thanked its proprietor for employing over 1,000 people.