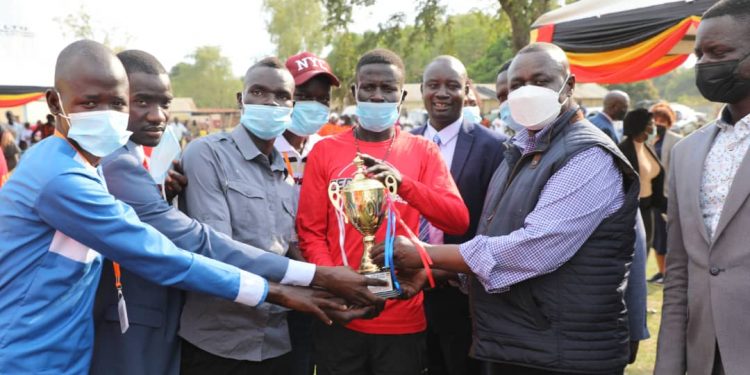 The Speaker of Parliament, Jacob Oulanyah, has called on the youth in Agago and Pader districts to get vaccinated saying they are much safer vaccinated than without the vaccine.

Oulanyah was the chief guest at the commemoration of the International and Africa Youth Day held at Akwer Primary School in Patongo, Agago district on Friday, 3 December 2021.

Speaking at the event, Oulanyah whose remarks proceeded a football game won by Patongo United Football Club, said some people had taken to social media and the Internet misleading the Acholi that Government was adulterating the COVID-19 vaccine before immunizing people with the aim of killing them.

Oulanyah told the youth that this was not true as he had been personally vaccinated with AstraZeneca, the same vaccine that many were talking against Covid-19. He said that he had completed his two shots and this would give him some level of protection against the virus.

Oulanyah dismissed claims by the instigator of the false information that she had traveled abroad and people were against the vaccine. He explained that the person who was spreading the information on social media was not telling the truth as all airports in the world are asking for vaccination cards and certificates before anyone is admitted in a country.

Oulanyah said it is because of vaccination that people are now able to move and congregate.

“Run and get vaccinated. It is important for these reasons; it will not stop you from getting the virus but if the virus comes, it will not put you down,” Oulanyah reassured the community.

Meanwhile, the Speaker also tipped the youth on education, saying there are several schools in the community and they should enroll in them. He advised the youth to engage in meaningful ventures. He called on them to embrace government programmes by forming groups and applying for funding.

“Whatever money the President has put in different programmes, he does it because he knows that if you give anybody sensible something small, it will be multiplied. If they give you one million shillings to start an enterprise, please start it, let it be a seed, do not eat it,” Oulanyah counseled.

Following concerns by local leaders about an alcoholic drink called Toreiro, Oulanyah asked the youth to stop the consumption of the drink so that the seller stops bringing it into the region. This is after elders complained that the youth were getting wasted due to drinking.

Honourable John Amos Okot (NRM, Agago North) asked the youth to look to the future with hope. He said without hope, people lack direction but with hope one can achieve a lot.

On concerns of the community for roads and other forms of service delivery, Oulanyah asked the area MPs to forward them to Government through him for consideration.