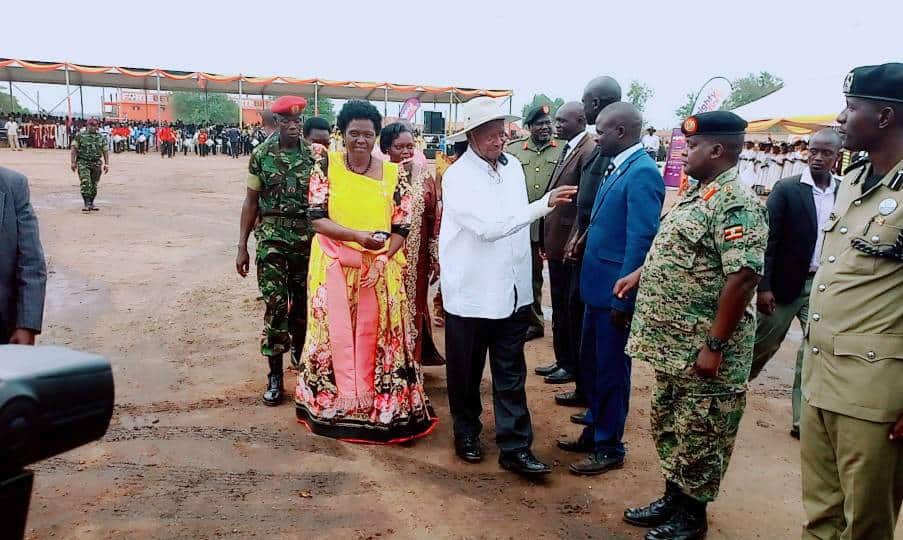 President Museveni has urged national resistant movement   (NRM) cadres to win people from the opposition to NRM party, saying that the opposition has no programs.

Addressing people at Boma grounds in kitgum Municipality, during the thanks giving ceremony of former (FDC) party die hard, Member of Parliament for Kitgum Municipality Anywar Beatrice now independent, said that (NRM) members should bring the opposition people to join the party.

“Win over these people, don’t allow our people to remain in the opposition bring them out, because opposition has no programs ,the President noted”

The President courted Mark chapter 1 16-17 where Jesus was   passing alongside the Sea of Galilee, he saw Simon and Andrew the brother of Simon casting a net into the sea, for they were fishermen. 17 And Jesus said to them, “Follow me, and I will make you become fishers of men.”

He said the NRM  government has done many things without the help of the opposition, like defeating Joseph Kony, disarmament of the Karamojong worriers, fixing roads, among others, therefore appalled to NRM cadre’s to convert the people in opposition to NRM party.

The President said that the he is a good poacher because when he sees a good animal, he goes for it, Museveni said he always gets problems with his cadres because they don’t know how to convert people from other parties to NRM.

“I have  been calculating Beatrice Anywar he said”, because  i would go  to  address the  parliament ,the opposition kept abusing me ,so I told Anywar why you Gulu girl why are abusing me  ,  another time she caused riots in Kampala , I said you have gone too far so I took her  to luzira.

Meanwhile Beatrice Anywar has vowed to work with NRM and President Museveni, without necessarily changing to NRM because she is an independent MP.

She said she has not picked a card membership for NRM but that does not deter her for working with Museveni, she however noted that when it’s appropriate time and if she finds fit, she will join national resistance movement NRM party.

“The coming of the president comes with blessings and that’s why today ,it’s a day of happiness,  saying  thank you to   him, and we are all greatful,leave alone the political differences ,which we might have had ,as he elaborated ,we differed  with him , probably he beat me at the game by the fact that  he kept on reaching out hand to me , Anywar  said “.

McCaskill under fire for Beverly with Obama