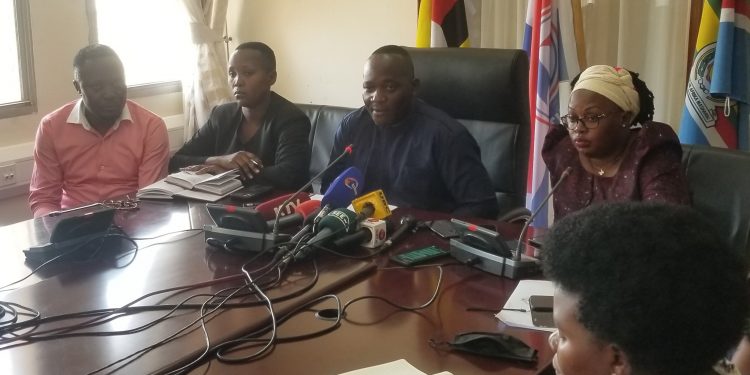 The Opposition in parliament has strongly condemned the manner in which parliament acted to censure Mityana Municipality mp Zaake from the position of a commissioner. The leader of opposition Mathias Mpuuga has announced a move to go to court and seek justice, citing gross abuse of parliamentary rules of procedure and principles of natural justice.

Yesterday, parliament voted to remove MP Francis Zaake from the position of backbench commissioner after he was found guilty of indiscipline by the parliamentary committee of Rules, Privileges, and Discipline.

Addressing journalists at parliament today, The Leader of Opposition Mathias Mpuuga described the process which was used to unseat MP Zaake as a mob justice which was staged against the embattled legislator.

Mpuuga pointed at illegalities that marred the process of censure citing rule 110 (6) which provides that a Commissioner shall be removed upon the vote of at least half of all voting Members of Parliament.

Mpuuga revealed that they exhausted all avenues of dialogue to protect the only opposition backbench commissioner from impeachment which was not successful. However, he noted that they are not about to nominate another person for the job.

Opposition hinted at Zaake’s next cause of action, saying they are going to seek justice in courts of law since parliament does not have an appeal tribunal. They condemned the double jeopardy against the Mityana municipality.

The opposition has also given the Censure motion mover Martin Ojara Mapenduzi time to explain to him before they take action against him. Mpuuga wondered about the motive of Mapenduzi a member of the shadow cabinet to wage a purge against his colleagues.

As the opposition slams Zaake’s censure process, those who masterminded Zaake’s impeachment were chest-thumping for the victory.