OPM and UNHCR Announce The Preliminary Results of the Verification Exercise 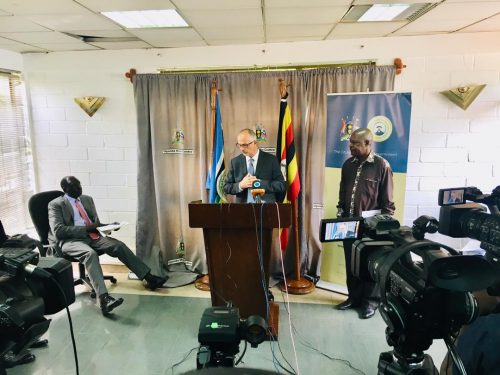 OPM and UNHCR announce the preliminary results of the verification exercise

KAMPALA: The Government of Uganda with the support of UNHCR, the UN Refugee Agency, concluded a comprehensive exercise to verify the identities of all refugees and asylum-seekers in the country, using enhanced biometric tools. The verification exercise, which was conducted upon a directive from the Rt. Hon Prime Minister in early 2018, was aimed at confirming the number of refugees and asylum-seekers registered in Uganda. It was also aimed at enhancing the quality of data and improving assistance management and the overall support for refugees. These objectives were achieved through the completion of the verification exercise and the roll out of the advanced biometric registration system.

The number of refugees and asylum-seekers registered by the Government as of the 1 March, 2018 was 1,444,856 individuals. By the end of the verification exercise 1,092,213 individuals have been verified as present representing 76% of the initial target. During the verification exercise, OPM continued to attend to the ongoing emergency and registered new arrivals in all settlements and at transit centers along the borders, using the new biometric registration system. Since March this year, 62,139 new arrivals mainly from the Democratic Republic of Congo and South Sudan were registered, bringing the active registered population in Uganda to 1,154,352 individuals as of end of October.

The Government of Uganda has one of the most progressive refugee policies, allowing refugees and asylum-seekers to live in gazetted refugee settlements and exercise freedom of movement and settlement within the country. As a routine practice, the government has provided a grace period of two months within which any registered refugee and asylum-seeker who missed the exercise, can approach OPM for verification. Taking this into consideration, the above verification numbers are preliminary. A more detailed analysis will be undertaken after the grace period.

The difference between the initial verification target stands at 352,643 individuals. Among those, 255,490 individuals were verified as inactive and closed for the following reasons: a) 158,533 individuals whose whereabouts are unknown as reported by family members; b) 34,174 were reported by their families to have returned to their countries of origin; c) 9,481 were identified to have registered more than once; e) 3,931 were reported deceased; f) 1,489 were closed as they were Ugandan nationals; and (g) A verification exercise by OPM in April 2018 confirmed the urban refugee population to be 55,812.

The total population reduction is 24% of which 17% can be explained based on the above reasons, implying that the remaining 7% cannot be explained. The overall difference in numbers resting therefore between the 7% and 24% figures, is not dissimilar to the decreases observed in other countries where verification exercises have been conducted.

Several factors may have contributed to the difference between the target and verified refugee population. For example, information received from South Sudan indicates about 80,000 persons may have returned over the last several months. The difference – although difficult at this stage to confirm – may be found in the number of refugees whose whereabouts are unknown, or within the refugee figures, the existence of whom the verification exercise was unable to ascertain. Since urban refugees do not receive humanitarian assistance, some may not have been motivated to come for verification.

According to the data, 40 % of the absentees reported by the relatives were in fact children aged between 3 and 12 years. Fingerprints of children aged 0-4 years are not captured and this could have allowed refugees to register the same children repeatedly during registration to enable them receive more assistance. Indeed, this was witnessed during the verification exercise. Thus, it is possible that while many refugees whose whereabouts were reported as unknown, could have returned, moved elsewhere or may not have existed. Some 35,000 persons were in fact identified and rejected at the early stage of the verification exercise as having already verified elsewhere or as impersonators.

The analysis also indicates that a majority of the refugees who were absent, originate from South Sudan and arrived between 2016 and 2017. During this period, Uganda was receiving an average of 2,000 refugees per day necessitating the rapid establishment of up to 9 settlements in a very short period, to save lives and provide acceptable living conditions. At the height of the emergency, for several days, up to 8,000 refugees were crossing into northern Uganda, overwhelming the government registration system.

The verification exercise and its results now pave the way for more focused and targeted assistance, based on reliable data. Registration of refugees will remain the responsibility of the Government of Uganda as enshrined in the laws of the country. The new bio-metric registration system is being deployed to register new arrivals and to update refugee population changes and will be fully in place by December.

Uganda is living up to its international obligations and has an exemplary refugee policy. The verification results confirm that there are more than 1.15 million women, children and men in need of continued international protection. The refugee response in Uganda is severely underfunded. Refugees and the communities which host them deserve sustained and adequate support and solidarity.