Now or Never For Basalirwa 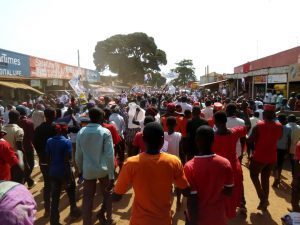 Its heated up in Bugiri as voters are wait to go to the polls on 27th July to cast their votes for their new legislator in the hotly contested battle between the four camps of JEEMA (Asuman Basalirwa) FDC (Eunice Namatende) former LCV chairman, (NRM)Haji Siraji Samanya Lyavala and Joel Wamono, independents.

Candidates in all camps are took advantage of yestedday being the last campaign , to convince the electorates to the cast the votes in their favor so as to grab to hotly contested seat.

JEEMA party president, Asuman Basalirwa who has on several occasion contested and failed to win.
Basalirwa is being backed by kyandondo east MP, Hon. Robert Kyagulanyi Ssentamu who has won the favor of many ugandans through his music and lately joining politics.

Basalirwa, whose campaign has been rotating around issues that concern the lowest citizen believes this is the time Bugiri has to vote for a leader of his stature if they are to register positive change.

Basalirwa who failed to agree with leading opposition party Forum For Democratic change (FDC) on who should lead opposition flag bearer in this contest, was yesteday followed by a huge crowd to the venue where he has had his final rally. His supporters were wearing red shirts, caps waving his flayers to show relentless support to him.

However, National resistance movement (NRM) candidate, Haji Samanya has also been having a good time as well . But locals castigate his camp for using government machinery to harrase the opposition mainly supporters of Basalirwa.

And FDC’s Eunice is also gunnined support from the diehard of the party and well-wishers accompanied by heavy weights from her party who traveled all the way from Kampala to Bugiri to convince voters to vote for her.

Business in Bugiri was paralysed as support of the candidates had been cris crossing the streets of Bugiri chanting the names of their candidates as they moved to the final campaign grounds.

Security in the area is tight with all kinds of units in the area to maintain peace, law and order following the shooting which left Asuman Basalirwa’s supporter dead early this week. Upon this sad incident, Basalirwa called for a special investigation into the matter warning the failure for the law enforcement agencies to do so, he will have to use his means to fight for justice of the killed innocent support and his family.