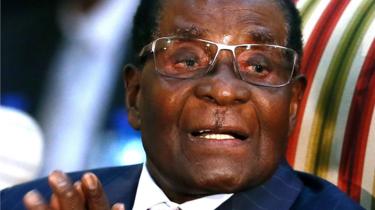 The World Health Organization (WHO) has appointed President Robert Mugabe of Zimbabwe as a “goodwill ambassador” to help tackle non-communicable diseases.

But critics say that during Mr Mugabe’s 37-year rule Zimbabwe’s health services have deteriorated, with staff regularly unpaid and medicines in short supply.

Dr Tedros, who is Ethiopian, is the first African to lead the WHO.

He was elected with a mandate to tackle perceived politicisation in the organisation.

Dr Tedros replaced Margaret Chan, who stepped down from her 10-year post in June.
Image copyright AFP/Getty
Image caption Dr Tedros was elected to reform the WHO
Controversial decision

The appointment of 93-year-old Robert Mugabe will cause astonishment among many WHO member states and donors.

A goodwill ambassador may be a largely symbolic role, but the symbolism of giving it to a man whose leadership of Zimbabwe has, critics say, coincided with a collapse of its health service, and major human rights abuses, will be very unpopular.