Members of Parliament want the government to revise the 70-person limit on congregation in places of worship as a pre-condition for reopening after months of lockdown due to covid-19 pandemic.

President Museveni last month allowed places of worship to reopene with only 70 congregants observing all the standard operating procedures, but MPs said the task force should re-consider this because some churches are large and can accomadate more than a thousand people.

Speaking during plenary sitting, Busia Municipality MP Geoffrey Macho (NRM), said since places of worship have the ability to observe standard operating procedures, adhering to measures to curb Covid-19, they should be allowed to increase attendants.

“Madam Speaker I have brought this matter of national importance to request  the government that since all places of worship  have observed SOPs in the first Sunday of people seating two matters to implement the social distancing they be allowed to seat people, the numbers they can manage , ”Hon Macho said.

He called upon the National Taskforce to advise the President that there are large churches and mosques which should be allowed to seat a number of people they can manage.

He also called on the government to provide masks to the public to enable them to adhere to standard operating procedures while attending prayers so that they increase the number of worshipers.

Kalungu West Member of Parliament Joseph Sewungu (NUP) said, some of the churches can accommodate more than a thousand people,therefore the concern raised by Hon Macho is very pertinent and must be revisited by the governmemnt .

“When you come to Catholic Church, Rubaga cathedral can accommodate over 10,000 people, now when we talk about 70 people, the priests at Rubaga are about 20, when you come to the nuns, they are more than 40 meaning that they only allowed priests and nuns to attend mass, no other believers, “Ssewungu explained.

Bulamogi County MP Kenneth Lubogo (NRM) said the President Museveni in his guidance allowed private cars to carry four people, yet there are churches that seat more than 2000 people, so it’s unfair to limit the congregation   to 70 only which is not even 5% .

“Madam Speaker the most important thing is to establish the spacing to ensure that a church that can accommodate 2000 people can be allowed to sit 500 people under the restrictions as long as the space between them is observed,” Hon Lubogo noted.

Speaker Rebecca Kadaga said it’s not cost effective for the church to organize soap and water for every group of 70 worshipers.

State Minister for Primary Health care, Hon. Joyce Moriku said re-opening of the country’s sectors since the advent of the covid-19 pandemic has been done in a phased manner.

She admitted that the capacity of places of worship vary from one to another but the opening from the time of pandemic has been systematic and in a coordinated manner, such that everything is not opened at once, though 70 may be a small number but since this is the first window for the opening of places of worship, the President will make another statement after a review the minister said.

Makerere Not Ready To Test For Covid19. 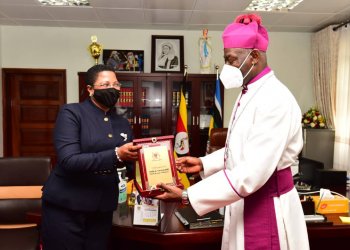 Makerere Not Ready To Test For Covid19.