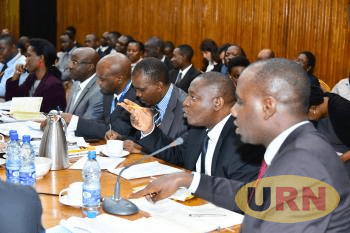 The government proposal to reinstate corporation tax on Savings Credit and Cooperative Societies-Saccos has met stiff opposition from members of parliament. Corporation tax is a tax imposed on the net income of a company.

Government proposes to levy the corporation tax on profitable Saccos with the aim of generating Shillings 10 billion. This is one of the proposed new taxes the Finance Ministry laid before parliament on Tuesday.

The others include the proposed Shillings 200 levy on a liter of cooking oil, 10% final withholding tax on commissions by telecommunication companies to mobile money and airtime agents and Shillings 200 daily levy on internet services like WhatsApp, Facebook and others. The State Minister for Planning, David Bahati appeared before the Finance Committee of Parliament to justify the proposed taxes and reforms.

He explained that government expects to generate Shillings 951 billion from the proposed policy measures and another Shillings 272 billion from administrative efficiency to achieve the policy target of 0.5percent in line with the National Development Plan II. However, the Finance Committee members unanimously criticised the proposed introduction of the corporate tax on Saccos, saying government resolved to exempt Saccos from taxes for the next ten years so as to encourage savings.

The Gomba East MP, Kalule Sengo argued that SACCOs have enabled several citizens to access low interest loans and saved them the wrath of banks who imprison loan defaulters. He noted that the proposed tax by government will stifle the economy. However, Bahati argued that a blanket exemption on all SACCOs will be abused since successful businesses will register as SACCOs to avoid taxation.

//Cue in: “to finance these…
Cue out:…an independent country.”

The legislators also roundly criticised the proposed Shillings 200 daily levy on WhatsApp, Facebook and Instagram user. According to government, the proposed levy is expected to generate Shillings 284 billion annually.

The Budadiri West MP, Nathan Nandala Mafabi asked Bahati to clarify on whether this tax will not amount to double taxation since social media users already pay tax through the purchase of airtime they use to access internet.

The Finance committee Chairperson Henry Musasizi asked the minister to appear before his committee on Thursday to illustrate how this tax will be implemented. The overall net revenue target for the coming financial year 2018/2019 is Shillings 16.2 trillion, which translates into a growth of 7.6%, compared to the Shillings 14.4 trillion budget for current financial year 2017/2018.

MOH to Reign in On Health Facilities Selling Vaccines

MOH to Reign in On Health Facilities Selling Vaccines

Korea and UNICEF launch programme to provide water, sanitation and hygiene services to over 50,000 students in Karamoja