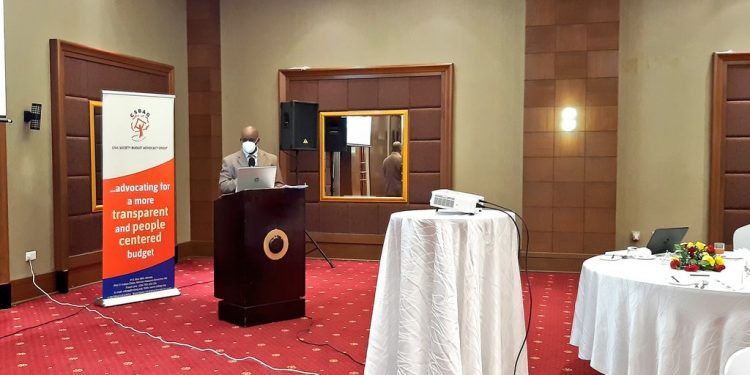 Members of parliament have been cautioned against legislating away their power of appropriation, should they proceed to pass the Public Finance Management (Amendment) bill of 2021 which allows Uganda National Oil Company (UNOC) to spend part of the revenue collected from petroleum products at the source without the approval of parliament.

The Civil Society Budget Advocacy Group (CSBAG) today met members of parliament on committees of Finance and Budget and rallied that to reject passing amendments in the PFMA saying they undermine the original intentions of the Act.

The Public Finance Management Act (PFMA) Amendment bill of 2021 seeks to amend section 57 of PFMA to insert new clauses which allow Uganda National Oil Company (UNOC) to retain the proceeds from the sale of petroleum products to meet its obligations arising from applicable petroleum agreements without parliamentary approval.  This according to experts is usurping parliamentary powers of appropriation.

During a meeting with members of parliament on the committees of Finance and Budget, Julius Mukunda the executive Director of noted with concerns that allowing UNOC a leeway to collect revenue and keep it outside consolidated fund and the petroleum fund and spend it at the source without approval from parliament will expose oil revenue to misuse.

The PFMA amendment bill which is currently before the parliamentary committee of Finance makes UNOC only answerable to its board and the cabinet regarding approval of investments. Experts believe Cabinet and the board are not sufficient enough to guarantee effective oversight and controls. They want all budgets, work plans, processes, and Reports to remain subject to parliament’s approval.

The Civil Society Budget Advocacy Group (CSBAG) has called for  Uganda Revenue Authority Model where the agency is allowed to spend revenue at source but specifically on items approved by parliament in the fiscal year budget.

Clause one of the bills proposes to revise the definition of petroleum Revenue, which is raising eyebrows of the civil society. According to them, if this bill is enacted, proceeds from the sale of petroleum arising out of state participating interest in the applicable petroleum agreements will not form part of petroleum revenue.