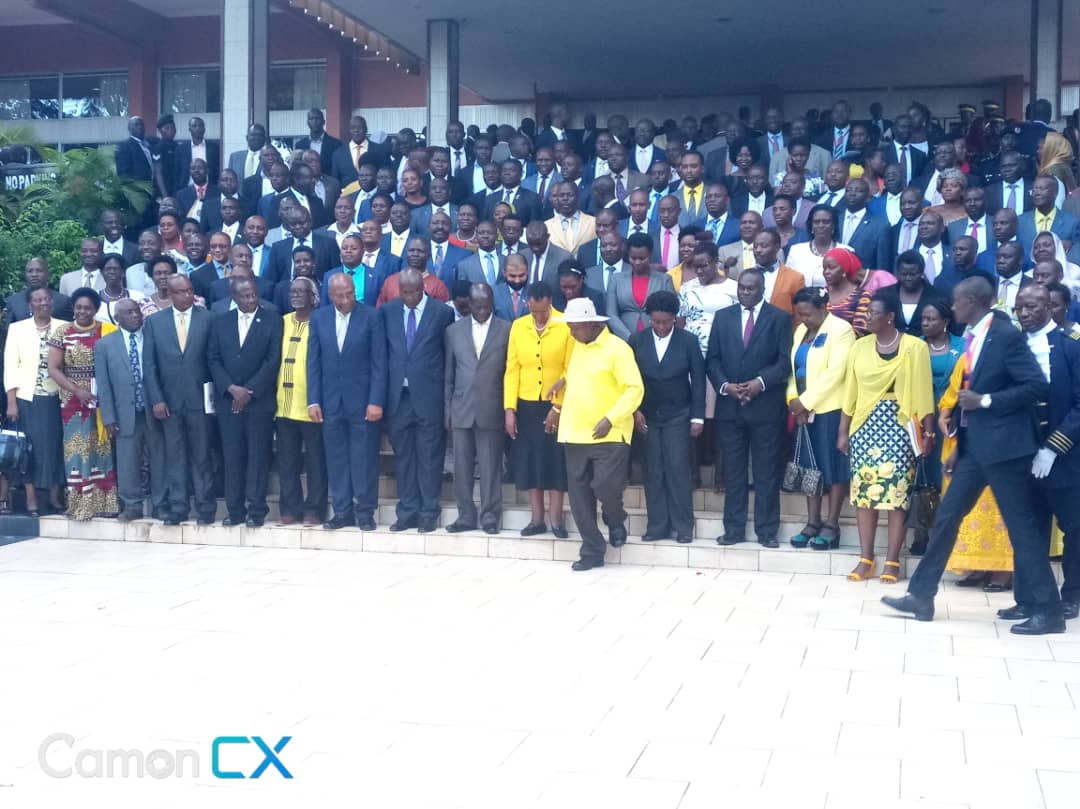 President Museveni and MPs Pose For Photo After ,The Reading of Budget Yesterday at Serena International Conference .

A section of NRM Members of Parliament have opposed the move by President Museveni to deny suspected killers Police Bond or Court bail saying it is a constitutional right.

Speaking after the budget reading yesterday by of the Finance Matia Kasaija, President Museveni said that he will not tolerate Police bond or bail given to a suspected killer anymore.

The Presidents move to deny suspected killers bail, is meant to stop the insecurity in the country.
But speaking to some of the MPs, including Barnabas Tinkasimire Buyaga west, Nambeshe John Baptist Manjiya county, Rwampara county MP Charles Ngabirano, Nakawunde Temulanda Mpigi woman MP, all say that the President made the statement out of emotion, because loss of the fallen Arua Municipality MP the late Ibrahim Abiriga who was gun down by unknown assailants last week in Kawanda.

They said that, there is need to follow the right procedure before one is proved guilty, because many innocent people will be kept in jail.

However kakumiro woman member of Parliament Robinah Nabanja supports the move to keep suspected killers in prison saying this will reduce crime.
“Of course this has been like incubator for criminals, we have incubated them enough, the President said this and I believe the country may have some relief,” MP Nabanja said.

While delivering his budget speech at Serena international conference in Kampala yesterday, President Museveni said that he does not want torolate police bond and court bail out any more.

“Now there something am not going to accept any more, two things Police bond, I don’t want to hear of police bond, somebody is who suspected of killing our people for no good reason , we give him or her police bond no way,” Musevini noted.

President Museveni also said that the judiciary should not grant bail to people suspected killers.
“Now the other thing , am glad that his lordship the chief justice is here please bail, bail for killers, is not acceptable, I don’t want conflict between institutions, because am always very soft ,because all these institutions are always stepping on us ,but am here into two capacities ,as the President of the country and as leader of the resistance ,”President Museveni said.