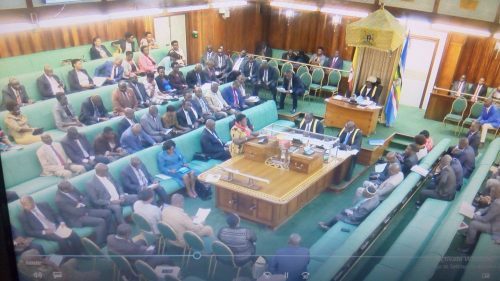 The speaker of parliament Rebecca Kadaga has yesterday tasked the minister of finance to appear before parliament and explain why they have delayed to gazette the excise duty amendment law ro reduce mobile money tax from 1% to 0.5%

During today’s parliamentary plenary the Nakaseke south member of parliament Paulson Luttamaguzi Ssemakula moved a petition tasking government to offer an explanation as to why it has delayed to gazette the excise duty amendment bill of 2018 which was passed by parliament in September this year and assented to by president Yoweri Museveni at the beginning of this month. The delayed gazzatement of the law has kept mobile money users paying 1% tax on withdraws yet the passed law reduced this levy to 0.5%

Luttamaguzi wondered why the government has taken long to gazette this law yet it has been rushing to gazette other controversial bills, Laws and members of parliament claiming it maybe deliberate to delay the implement ion of the law in order to continue draining mobile money users.

Legislators warned government to refund the half of 1% tax that has been collected since the president assented the mobile money amendment law if not they will drag it to courts of law. They claim that they will not tolerate marginalization of parliament by cabinet.

the speaker Rebecca Kadaga then asked the minister of finance to appear before parliament tomorrow to explain the fate of mobile money tax law whether it was assented as lawmakers claim.

Ministry of Health has warned that antimicrobial Resistance Related Deaths To rise To 10 million by the year 2050.