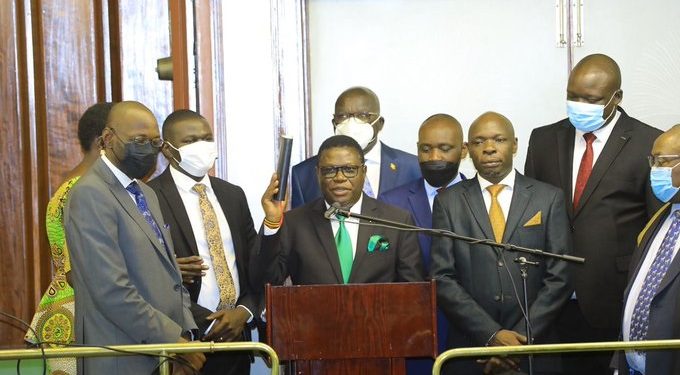 Mao Swears In As Ex-officio MP Tasked to Sort Out Political Prisoners.

The newly appointed Minister of Justice and Constitutional Affairs, Hon. Norbert Mao has taken oath as a Member of Parliament today.

Mao has been tasked by the speaker of Parliament Anita Among to sort out the issue of political prisoners.

Nobert Mao who was recently appointed by President Yoweri Museveni to Cabinet following a signing of a memorandum of understanding between the Democratic Party which and the National Resistance Movement;  in today’s parliament sitting took the oath of allegiance and swore to preserve and protect the Constitution of Uganda

Among also urged Mao to address the public outcry of the political prisoners incarcerated in different prisons across the country.

However his sitting arrangement in parliament didn’t go without challenge as opposition MPs asked why DP members continue to sit on the left side of the speaker while their party president has crossed to the front bench on the right.

Several DP top officials accompanied Moa and he made his returns to parliament after 16years. They also supported their boss for his new political move.