Manchester City will win the Premier League if they beat arch-rivals Manchester United in the derby at Etihad Stadium next Saturday after the easiest of victories at Everton. 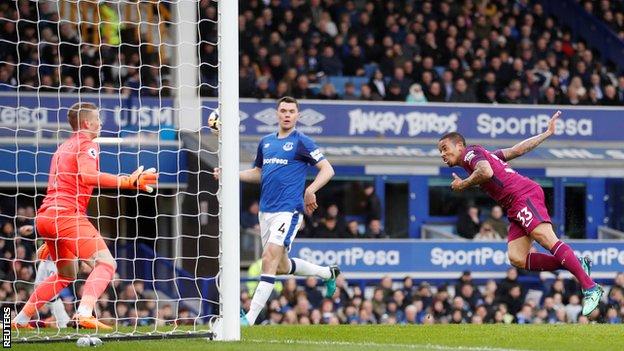 Manchester City will win the Premier League if they beat arch-rivals Manchester United in the derby at Etihad Stadium next Saturday after the easiest of victories at Everton.

Manager Pep Guardiola had failed to record a victory against Everton in three matches before this visit to Goodison Park – but this result was never in doubt from the moment Leroy Sane volleyed home David Silva’s cross after four minutes.

Everton barely mounted even token resistance and City had effectively restored their 16-point advantage at the top of the table by half-time after Gabriel Jesus headed in Kevin de Bruyne’s cross and Raheem Sterling applied a simple finish to another Silva delivery.

Yannick Bolasie pulled a goal back for Everton after the break when he fired in via a post from 20 yards but this was a minor interruption to City’s serene progress and they now have the opportunity to reclaim the title in circumstances they will relish when Jose Mourinho brings his Manchester United side to Etihad Stadium.

Given recent meetings between the two sides, City and Guardiola approached this fixture with a measure of caution, which they were able to put behind them as early as the fourth minute when Sane volleyed them into the lead.

If Everton had a plan to put City under pressure, the statistics for the first half alone were a monument to how successfully they were able to deal with any problems Sam Allardyce had hoped to pose them.

When Sterling swept home City’s third eight minutes before the interval, they had enjoyed a remarkable 84% possession, although some expressed surprise that embarrassed Everton’s share was so high.

And in that one-sided first half, Manchester City midfield man Fernandinho completed 62 passes while the entire Everton team completed only 64. The Brazilian finished with 14.5% possession himself while the whole Everton team managed 17.9%.

Sane also impressed in scoring his ninth league goal of the season and playing a key role in Jesus’ goal.

“How he stretches teams, it makes the pitch so big and is so difficult to defend against,” Shearer added.

City, with Silva the superb orchestrator, operated on cruise control throughout – barely breaking sweat to close in on the Premier League and, significantly, not taking too much out of themselves ahead of Wednesday’s Champions League quarter-final first leg against Liverpool at Anfield.

On so many levels, this was the perfect warm-up for that game and the derby against United next Saturday night that could see City win the Premier League in the sweetest of circumstances.

Kevin de Bruyne has rightly claimed huge plaudits for his contribution to Manchester City’s runaway title success – but he has been ably assisted by Guardiola’s little magician Silva.

The 32-year-old Spain international simply gets better with every passing Premier League season; the £24m City paid to Valencia in July 2010 now looking one of the great bargains.

Silva pulled all the strings here at Goodison Park, from the moment he showed sublime technique and vision to control a pass before sending a perfect cross to the far post for Sane to volley City in front.

All City’s big players played their part but Silva was at the heart of it, having the time and space all world-class performers can make for themselves. He not only ensures he has several options every time he receives possession, he has the happy knack of then choosing the right one.

Manchester City’s procession to the title has had many key contributors – and Silva is right up there with them.

What now for Everton and Allardyce?

Everton manager Allardyce was in confident mood before this game, pointing to an improved record since he arrived and a belief the club’s supporters are behind him.

He is certainly right on point one but this footballing relationship carries all the appearances of a loveless marriage between Allardyce and a fanbase who accepted what was an emergency appointment on an 18-month deal at the end of November, five weeks after Ronald Koeman’s sacking.

Allardyce, as he does, has guided Everton to a position of almost certain safety and this joyless season at Goodison Park certainly cannot solely be placed at his door given previous struggles under Koeman and then caretaker David Unsworth.

The atmosphere at Goodison Park, however, was flat throughout and while City’s excellence and superiority was accepted, Everton’s fans were restless because of the lack of urgency and aggression that allowed Guardiola’s side the run of the game.

And Allardyce’s approach of sending so many long balls towards the tireless Cenk Tosun looked dated when set alongside City’s passing brilliance. The Turkish striker was given sympathetic applause when he was substituted late on.

Allardyce has not won the hearts of Everton’s support and there are further reports of another summer of change at Goodison Park this summer with PSV Eindhoven sporting direction Marcel Brands and Shakhtar Donetsk coach Paulo Fonseca touted as potential replacements for director of football Steve Walsh and Allardyce himself.

Whether that is a direction Everton owner Farhad Moshiri wishes to take remains to be seen, but the ambitious billionaire certainly has some big decisions to make.

‘You have to be aggressive here’

Manchester City manager Pep Guardiola said: “It’s so good, we are so happy. After three weeks without a game, you never know how you will react.

“We started the first half so good. In the second half they got the goal and had five minutes more, but after that we controlled the game. It’s the first time we’ve been able to win at Everton, together, and one more game we can be champions.

“You have to be aggressive and keep the ball. At Goodison Park and Anfield, if you don’t win duels, if you don’t show up, it’s almost impossible to take a result. It’s not just today. It’s two years thinking and talking and training that way.”

Everton manager Sam Allardyce said: “Manchester City are a top quality team, you have to admire a team that especially in the first half were too good for you. As much as the lads tried it was something we couldn’t cope with.

“The real turning point was when we should’ve scored with Bolasie, gone 1-1, and then they scored. It was very difficult when they scored, I thought Silva was offside for one of the goals but what can you do.

“We fought, battled, scored and tried to go until the very end. All their 11 are fantastic in that system and that’s why they are so far ahead.”

Can we have our ball back please? – the stats

City visit Liverpool in the first leg of their Champions League quarter-final on Wednesday, 4 April (19:45 BST), before both the Merseyside and Manchester derby are played next weekend.

Everton host third-placed Liverpool on Saturday, 7 April (12:30 BST), while City will clinch the title if they win at home to United (17:30 BST).

Shots on Target
Home2
Away4

Related to this story