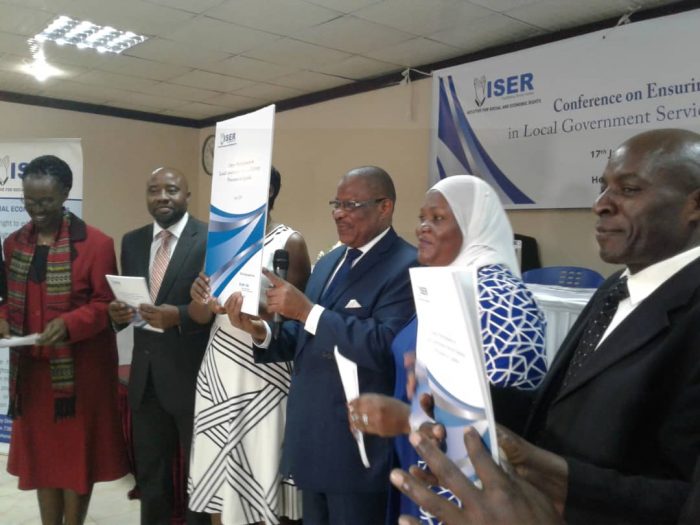 Report findings released by the initiative for social and economic rights (ISER) indicates that the continued growing low and lack of better service delivery at lower levels is attributed to failure to engage the citizens in decision making.

The report dubbed citizen participation in local govt service delivery process in Uganda highlights that awareness among community members and their leaders of the right of citizens to participate in decision making processes remains significantly low as this attests to the need to improve community and leaders’ sensitization on the right to health, education and water include the right to participate in programme planning, monitoring and decision making.

Ms Angella Nabwowe Kasule, the programs officer ISER who also doubles as the lead researcher says, in the report that in the six districts where the research was carried, communities have health, education and water committees full of non qualified persons who make poor decision hence ending up not delivering the best that these communities expect.

However, on average, 898 respondents in the sampled six districts of Bushenyi, Iganga, Kayunga, Kumi, Kyenjojo and Mbale, the growing social, economic marginalization in local govts has created a wide poverty gap among local ugandans at the expense of non caring leaders from the lower to the upper level. Hence the people cannot even afford a TV set for effective communication, as 48% males earn not more than UGX.250,000 annually.

Further the report indicates that in these districts among others, the education and health status of the standing facilities are in a sorry state hence offering poor services to the citizens of this nation.

However, the chairperson, Uganda human rights commission, Hon. Med Sozi Kagwa calls upon all leaders in Uganda to adopt the system of listening to people’s demands and fully implement them than implement what they think will work for the citizens.

Kagwa says this has continued to fail better service delivery to most Ugandan leaving them marginalized.

Local govt leaders from Kumi, Buhenyi, Kayunga, Mbale among others represented by the chairperson, Kumi district, Ms. Apolot Christine attributes the current lack of public engagement and presence of unqualified education, health and water committees at districts to low funding from the central govt.

Meanwhile Benard Mujuni, the commissioner equity and rights, gender ministry and Rosette Kuhiirwa from national planning authority call for full implementation of policies and laws to effectively see the fruits of decentralization.

The research was carried out in the last three years is aimed at assessing the implementation of citizens participation, especially in respect of marginalized groups, in local govt service delivery processes in Uganda.