Kingdom of the Netherlands Accredits Envoy to EAC Bloc 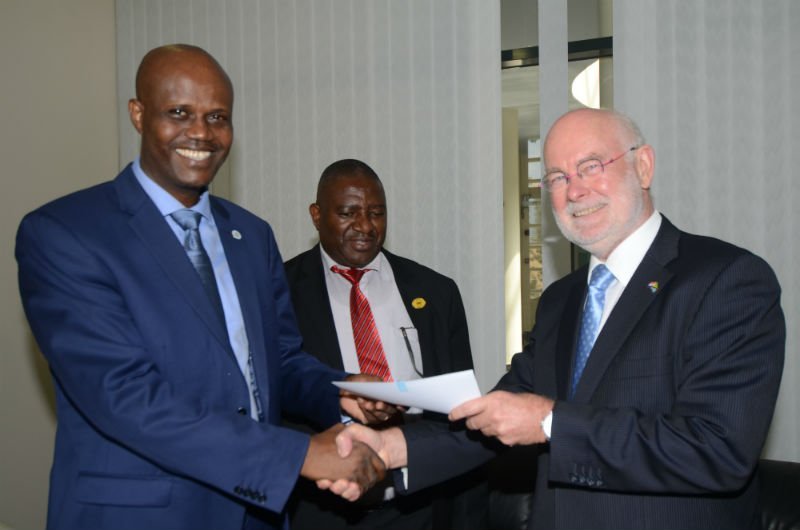 The Ambassador of the Kingdom of the Netherlands to the United Republic of Tanzania and the East African Community, H.E. Amb. Jeroen Verheul, today presented his credentials to the EAC Secretary General, Amb. Liberat Mfumukeko at the EAC Headquarters in Arusha, Tanzania.

Receiving the Dutch Ambassador, Amb. Liberat Mfumukeko hailed the strong relations existing between the Community and Netherlands and commended the government of Netherland for its dedicated support to the EAC integration process.

Amb. Mfumukeko informed Amb. Verhaul of the significant outcomes of the just concluded Joint EAC Heads of State Retreat and Summit which include, among others: 17 EAC Flagship Projects approved for championing, launching of the 5th EAC Development Strategy (2016/17-2020/21), validation of nine key investment priorities areas for health and implementation of new and on-going earmarked infrastructure projects in the region, progress report on the European Economic Partnership (EU-EAC EPA) negotiations, progress report on the constitution-making process for the EAC Political Confederation, and the Inter-Burundi dialogue under the Facilitator; H.E former President Benjamin Mkapa and Mediator; H.E Yoweri Kaguta Museveni.

The Secretary General disclosed that the Community will continue to engage with the EU on the concerns of some Partner States on the EPAs, adding that in the event that an acceptable way forward is not reached, the Community shall explore the use of variable geometry in the implementation of EPAs.

Amb. Mfumukeko also shared the progress made by the EAC in the four pillars of integration namely the Customs Union, Common Market, Monetary Union and Political Federation, adding that the Community had made great strides in the four pillars due to political goodwill by the leaders of the Partner States and support from the EU through the Partnership fund as well as other Development Partners.

The Secretary General reaffirmed EAC’s commitment towards realizing significant achievements in trade, customs and infrastructure development. “Trade is a way to reduce conflict and unemployment hence the need to create a favorable business environment that will boost the Private Sector and attract investments within the region”, he said, noting that East Africa has an extremely high number of educated yet unemployed youth.

In his remarks, Amb. Verheul assured the Secretary General of his country’s commitment to working closely with EAC to enable the Community attain its objectives in the integration process.

The Ambassador said Netherlands was keen to share with the EAC its experiences in the European integration, adding that the EAC could learn from the EU in addressing some of the emerging challenges in the integration process.

The Dutch envoy also commended the Facilitator and the Mediator of the Inter-Burundi dialogue for the progress made thus far, urging that the negotiations should continue to be as inclusive as possible.