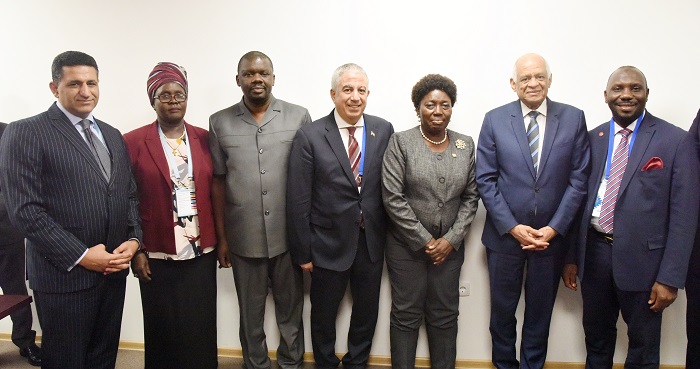 The Speaker of Parliament, Rebecca Kadaga, has allayed concerns raised by the Speaker of the House of Representatives of Egypt, Ali Abdel-Aal, on the use of the River Nile, whose basin is situated in Uganda, on Lake Victoria.

Kadaga assured the Egyptian Speaker that Uganda had not taken any action that could affect the use of the Nile waters by Egypt, noting that the waterbody was their major source of livelihood.

“I have discussed this issue with President Yoweri Museveni and I want to bring the reassurance of my Government that nothing will happen unless all stakeholders have a consensus,” said Kadaga.

The Speaker, in a bilateral meeting with the delegation from Egypt, on the sidelines of the 141st Inter Parliamentary Union in Belgrade, Serbia, also highlighted the need to revive the Nile Basin Association to improve cordial relations among the Nile Basin Member States.

“Here at the IPU Assembly, we have been talking about the need for parliamentary diplomacy; resuscitating this Association that was introduced about 10 years ago, should be a highlight of our Parliamentary work,” Kadaga added.

Speaker Ali Abdel-Aal noted that the Nile was a major contributor to the Egyptian national economy, noting that the proposed construction of the Reconnaissance Dam in Ethiopia could affect them, thus the need for Uganda’s support.

“Egypt is entitled to 55.5 billion gallons of water according to an international treaty signed in 1929 where the population was only 20 million people. We now have a population of 104 million people but we still get the same amount of water,” noted Ali Abdel-Aal.

He added that it would only be prudent for the Reconnaissance Dam in Ethiopia to be built over a period of 7 years to allow sufficient flow of water on to Egypt.

Kadaga also commended Egypt’s support to Uganda through its companies like the Arab Contractors among others, adding that Uganda had a lot to learn from Egypt with regards construction.

“I have told Parliament severally that we need to encourage more of these companies to come and set up base in Uganda so that we can create more employment opportunities for our people,” said Kadaga.

She also held a bilateral meeting with the Speaker of the Grand National Assembly of Turkey Türkiye Büyük Millet Meclisi Baskanı, where she called for better trade relations.

“Mr. Speaker, our Ugandans who are doing trade with Turkey have often faced double taxation. We need your support on this matter, and also to encourage more exports from Uganda to Turkey so that we can benefit mutually,” said Kadaga.

Millet Meclisi commended Kadaga for her work in fighting for the rights women, girls and youth in Uganda, and also committed to follow up a Memorandum of Understanding to improve legislative practices between the two countries.