Inside  -The  New Scientific Findings on The Safety  of  GMO Products in Uganda and  THE Unresolved Issues  on  The  Controversial  GMO Bill!

New scientific finding into the controversial botched accent of a GMO Bill into law by president Museveni indicates that there’s no hazardous effects of GMO agricultural products to human life nor to the soil fertility in Uganda.

The revelation made by  the national coordinator of Open Forum on Agriculture Biotechnology, Philip Chemonges falls on the heels of a bounced back GMO Bill to parliament by president Museveni for further scrutiny before accenting to it into law.

According to Chemonges, a lot of rigorous checks are carried out in the course of developing a GMO product, this seeks to ascertain highly technical regulation of GMO products trending on the market.

“I can tell you it’s highly safe compared to our indigenous ways of breading, at the laboratory we have checks, at green house we have checks, at the confined filed, and before we release genetically modified crops we make sure that, it’s not toxic does not cause angelic reaction, it does not cause hypersensitivity reaction and we keep the nutrition composition, and must pass all tests before it is released”. Chemonges narrates

As the Uganda parliament awaits the reintroduction of the GMO Bill on the floor of the house, there has been counter and encounter accusations on Ugandan Agro biotechnological researchers that they have been bought off by Mosanto and Bills and Milnder Gates Foundation to portray GMO products as none hazardous to human health and soil texture composition in Uganda.

These allegations has not only dented the image of the researchers but also risk being sentenced to prison if its proven beyond reasonable doubts that they picked foreign money to endanger the lives of Ugandans. The most preferably charge may be treason this including recalling their practicing certificates and terminating their academic qualifications.

The targeted government researchers include those from the National Agricultural Advisory Research Organization (NAARO), Namulonge Research Center under Makerere University and Kawanda Research Center under the Ministry of Agriculture; all these are being accused by politicians to have generated false reports on GMO products and provided them to government justifying how the products were good and none hazardous to human health, soil texture in Uganda and pose no risk to the traditional crops in Uganda.

The damming intelligence report on Ugandan Agro-Biotechnological researchers also incriminate them to have been picking money from the US Embassy in Uganda through Civil Society Organizations to buy off the conscience of MPs in Uganda who passed the GMO Bill last year in December in total disregard of the parliamentary rules and procedures on the question of quorum.

This culminated into the bouncing back of the GMO Bill to parliament by the president for further scrutiny before he accents to it into law.

However, if the situation surrounding the re-tabling  of the GMO Bill is not well managed it may cause a diplomatic impasse between Uganda and the United States since the accusations levelled against the US ambassador to Uganda Debora Malak interfere with her diplomatic immunity and infringe on Uganda’s diplomatic relations with the United States.

In the dossier each Ugandan legislator who voted for a yes pass of the botched GMO Bill last December is alleged to have sold her conscience for US$100 which is equivalent to Uganda Shillings 370,000/=. The money in question was being picked from an NGO situated in Ntinda a Kampala suburb according to MP Thomas Tayebwa.

However, Chemonges says there negative perceptions about GMOs because there people portraying them to be bad, because they don’t understand the GMO Bill well.

However, GMO is  a technology which involves transferring genes of interest to specific characteristic to the plant of interest, therefore the GMO development is not done  haphazardly.

World over scientists use GMO to identify the problem and look for possible  solutions and for those which have no solution like banana wits, like cassava brown strip ,scientists use this technique of GM  to  develop a crop and make it to observe that characteristic of interest .

“If the gene is for drought resistance we only   pick that gene, and then transfer it into the crop of interest so that expresses that characteristic” Chemonges said.

The development of GMOs is premised on an ethical practice to make sure that, they protect the environment, human life, aiming at achieving the highest form of safety.

On the biotechnology and bio safety bill 2012 that was passed by parliament but bounced back by the president for further scrutiny, Cemonges says  it would be good to have a regulatory law, to make sure that the country benefits from the GMO technology, despite few concerns of scientist on the state of the bill.

Korea and UNICEF launch programme to provide water, sanitation and hygiene services to over 50,000 students in Karamoja 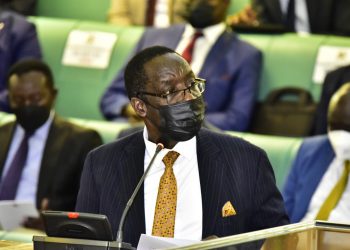 Government  Plans To Scrap 12% Tax On Internet   The government is planning to scrap off the 12% excise duty...