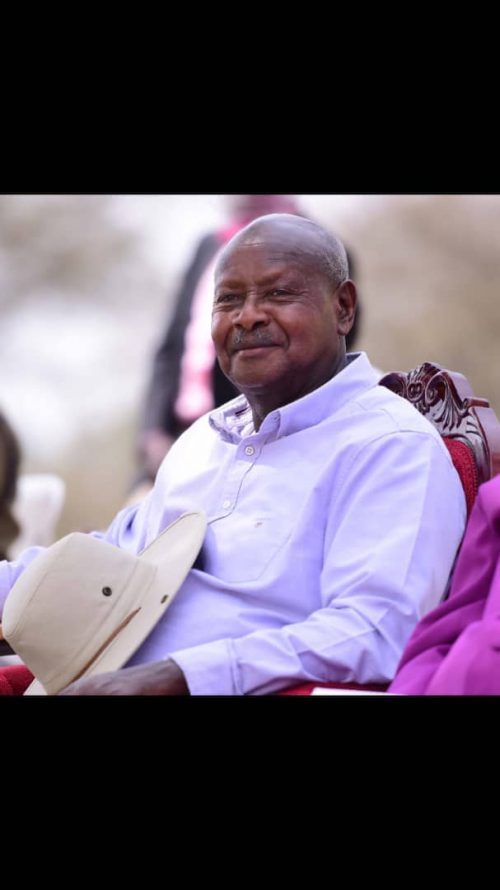 Countrymen, Countrywomen and especially, the Bazukulu.

Greetings. Some days have gone by while what President Trump calls “fake news” generators, especially the Monitor and their TV, the NTV, have been putting it out that our grandson, the indisciplined Bobi Wine, is gravelly ill, he cannot talk etc.

They were putting it out that because of their “rough” handling of the MPs while arresting them, the Security forces could have done grievous damage to Bobi Wine.

I decided to check with Army doctors because, being a disciplined Army, UPDF doctors always take precautions in such situations. Bobi Wine had already been seen by doctors in Arua, Gulu and Kampala. He has no head or chest injuries or bone fractures, they informed me.

The fake news generators and even some of the elements of the Security forces are concentrating on the stoning of the President’s car. Please, that is not the most serious problem here. That President has the capacity, either alone or in company with his personal security, to defend himself, not only against stone throwers but against any attacker.

I have done that for the last 48 years. I defended myself against Amin’s soldiers on the 22nd of January, 1973, in Mbale, against the Kenyan policeman Patrick Shaw in Nairobi in 1978, against Tabuley near Atiriri in 2003 etc etc.

The biggest problem is political leaders like Kassiano Wadri and Bobi Wine forming, or allowing indisciplined groups to be formed under the cover of elections, groups that form illegal processions in built-up and heavily populated areas, carrying stones, up-rooting side walk pavers to use as missiles, to attack defenceless women, children and other civilians.

All this is aimed at intimidating the majority NRM voters from turning up to vote so that the minority can win. This is on top of importing voters from other areas to vote in Jinja East, Bugiri Municipality, Arua Municipality etc. The evidence is overwhelming and it will be produced in court.

During the General Elections, it is not feasible for the opposition to use too much of these fascist tactics because voting is taking place everywhere and they are too few.

In Kampala, however, they have been doing it for a long time. Indeed, in Arua, Jinja East and Bugiri Municipality, they succeeded because the majority feared to turn up for voting. In Arua Municipality only 16,000 people out of 46,000 people turned out to vote!!

What does this mean for the pseudo-democrats of the so called “Civil Societies”, by which they mean agents of foreign Governments? How can you call this democracy when People fear to turn out to vote?

We fought for the freedom of the people of Uganda to vote freely without threats by word or action. We shall defend that. We recently had LCI and Women Council elections per village in 54,713 villages out of the total of 60,774 villages in the whole of Uganda, by lining up behind candidates.

No cheating, no violence because the People were in charge, not the corrupt election officials, colluding with opportunistic and corrupt politicians to usurp the authority of the People by having individuals elected by cheating or intimidation against the wishes of the People.

Pseudo-democrats, be informed that the game of trying to hijack our democracy by fascists and foreign agents is over. We shall not tolerate any threats by words or by actions. Enough is enough. Media houses should also stand warned. Do your mandate: balanced reporting.

These last points:
One. Throwing of stones, in close proximity in built up areas, is intention to kill. Remember, a policeman by the names of Ariong John Michael (Assistant Inspector of Police) was killed in Kampala near the Old Taxi Park by a stone thrown by those indisciplined people. How about the NRM supporters, ordinary people, who are made targets of those stones as happened in Arua, Bugiri etc?

Two. The indiscipline of some of these Opposition MPs was displayed in Parliament during the Age Limit debate. Instead, of arguments and logic, they attacked other MPs, threw chairs, up-rooted microphones etc. This was in Parliament with cameras and everybody watching. How about the negative results when they transfer that indiscipline to the streets and built up areas?

Three. Apart from the many injured, the property destroyed, the failure of 70% of the electorate in Arua turning up to vote because of fear of violence, the raping of women in Jinja East and Arua, we have already lost two young people, killed, in Bugiri and Arua, in the violence. The precipitaters of this will not be allowed anymore latitude of damage.

Anybody who is a friend of the young politicians like Bobi Wine should advise them that short cuts like cheating, importing voters, intimidating the voters of the other side, ballot stuffing etc will lead them and Uganda to doom. That is what the young politicians of independence thought and did and it led to disaster.

Even some of the NRM young politicians, I hear, try to emulate those evil practices of cheating. However, for them, they do not use violence. I will uproot those evils. A revolutionary politician is like a mulokole- no cheating, no lying. No killing prisoners. No mistreatment of prisoners. That is how we succeeded.

PS: Hon Zaake escaped from police custody. The police are looking for him.

Few months of work made their body perfect

Few months of work made their body perfect