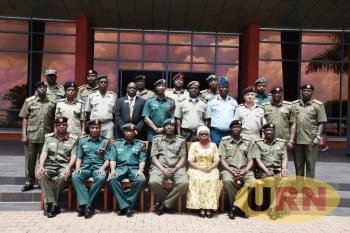 The Chief of Defense Forces David Muhoozi has applauded the Tanzania army for helping Uganda liberate itself from the bad leadership of former president Idi Amin Dada.

Muhoozi welcomed and commended the role played by the Tanzania People’s Defence Forces (TPDF) in ensuring regional stability for sustainable development. He noted the need to maintain close cooperation between Uganda and Tanzania, which is premised on the fact that both countries share a lot in common.

Gen Muhoozi applauded TPDF for its role in helping Uganda liberate itself from the bad leadership, saying it was a timely occurrence to cement the relationship.

He observed the need for regional cooperation to address global challenges like the youth bulge, unemployment, technology changes, among others. “Integration on the international arena is inevitable. You cannot do without it. Whether you want it or not, our borders can be penetrated if we don’t take the right measures,” noted Muhoozi.

Muhoozi also urged the visiting military students to use their stay in Uganda as an opportunity to see far and extract opportunities that are beneficial to their countries of origin and army.

In his presentation, the Chief Political Commissar Brig Henry Masiko, encouraged students to protect the existing peace for development to thrive in Africa. He noted that African Countries share a lot in culture and external influences; and thus, called for increased integration.

Amin, who was president of Uganda from 1971 to 1979, has his legacy dominated by discussion of murders, mismanagement and suffering of Ugandans but those in support of Amin say Amins alleged bad character was propagated by the Western world. They say Amin’s legacy has remained deep down on the ground.

They also say Amin gave back to the country by expelling Indians, and focusing more at Ugandans.

Hussein Lumumba Amin, one of Amin’s son says most of what Amin did was for Ugandans.

“He built strong institutions, ensured Uganda boosted economically, and he ensured that he had a nationalistic approach to development”.

Amin died in Jeddah in Saudi Arabia in 2003.