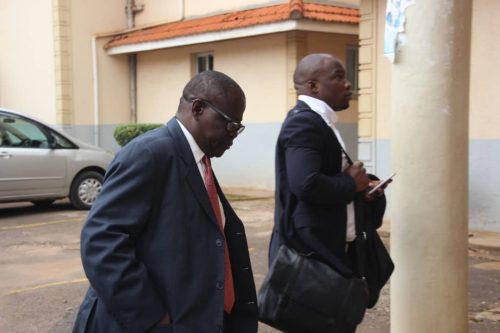 The Anti corruption court indicates that the former Works Minister Eng. Abraham Byandala is innocent of Abuse of Office and Disobedience of Lawful orders by the IGG in the controversial upgrade of the Mukono-Katosi Nyenga road in 2014.

Presiding Judge Lawrence Gidudu has however found guilty the former UNRA head of finance Joe Ssemugooma and his assistant Wilberforce Ssenjako of Abuse of Office and neglect of duty.

They approved a payment of 24.7billion shs to Eutaw Construction company without first verifying the securities for guarantee of the said contract.

Witnesses like Minister John Byabagambi, Matilda who was Byandala’s Secretary and a foreigner Micheal Fiako were not called to prove that Byandala abused his office or disobeyed lawful orders by the IGG, when he directed the formalization of the subcontract between EUTAW Construction Company and CHICO an month after the IGG stopped the works.

However the Minister was mandated to supervise UNRA in absence of the UNRA Board and the letter he wrote to former UNRA ED Eng Bernado Kimeze Ssebbugga directing the signing of the contract between UNRA and EUTAW was legal, since as a politician he wanted the road to be done, now that the funds were available.

The Judge also observed that the Solicitor General and UNRA legal Counsel Marvin Byaryaruha okayed the signing of the contract because the law allows due diligence to be carried out anytime.

Therefore holding Minister Byandala culpable without evidence would be speculative.

Both Eng. Kimeze Ssebbugga and Lawyer Marvin Byaryaruha have also been acquitted.

The Judge did not also find any loss occasioned to government because there is no evidence of audit reports presented by IGG to ascertain how much was lost.

However the Presiding Judge has found guilty the former UNRA head of finance Joe Ssemugooma and his assistant Wilberforce Ssenjako of Abuse of Office and neglect of duty.

They approved a payment of 24.7 billion shs to Eutaw Construction company without first verifying the securities for guarantee of the said contract.

The Judge also found guilty Businessman Appolo Ssenkeeto guilty of theft of the 24.7bn shs when he was aided by fake foreigners to execute a fraud at Uganda National Roads Authority.

Ssenkeeto is also responsible for the fake securities which he personally sourced.

The 73 page Judgement is still being read on a trial that has taken three years.

You Incited The Public To Commit An Offense. Nambooze Charged