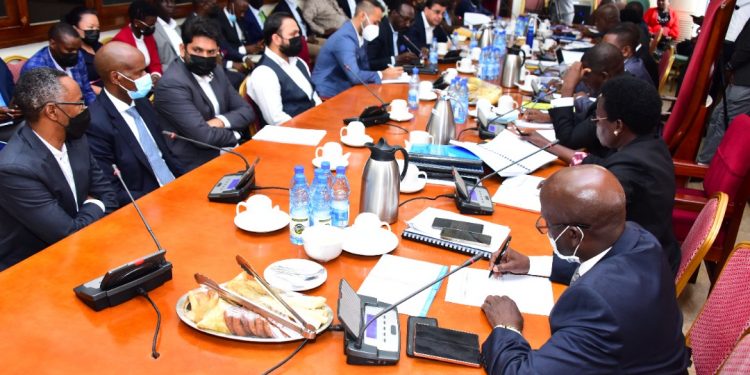 Former tenants of Nakawa-Naguru tenants have rejected the compensation offer made by the Government of Shs40.562Bn which would see each tenant paid Shs17.797M and are instead asking for the money increased to Shs50M as compensation for lost land and property.

In 2006 government of Uganda came up with a plan to develop Nagguru/Nakawa Housing estates into a modern satellite city and Opec Prime Properties U Ltd was identified as an investor under the Public-Private Partnership agreement.

In 2011 1747 sitting Tennants were evicted to pave way for the development of 1747 modern subsidized residential units on a promise that they could be resettled later at a subsidized cost. Which has not happened. Today former Tennant’s appeared before the Adhoc committee of parliament and made their outcry.

Following termination of the PPP agreement with Opec cabinet took a decision to compensate Tennants with an ex-gratia amounting to Shs17.8m in 2019 which promise the government has not honored up to date. Now Tenants want the monetary terms to be revised from 17.8m to 50m.

While appearing before the Ad hoc Committee on Nakawa-Naguru, Simon Barigo, Chairperson Naguru-Nakawa Registered Tenants Association described as handouts the Shs17m offer in compensation saying it doesn’t cater to the market prices of land and inflation in the current times. They asked to be allocated 30 acres of the land to develop it themselves.

The committee also interacted with companies and directors that hold land in Nagguru-Nakawa including Phaneroo ministries. But Phaneroo’s lawyer known as Kyerere was turned away as committee members want to interact with Apostle Grace  Lubega the shareholder who acquired the land in question at Nagguru Nakawa.

The Ad hoc committee has also summoned Sudhir Rupaleria to appear before the committee and explain how he acquired government land in Nagguru. The committee chairperson also  Dan Atwijukire handed over a Chinese national who represented Global Paper Company in the meeting to police CID for interrogation after discovering that she has been working in the country for five years without a work permit.