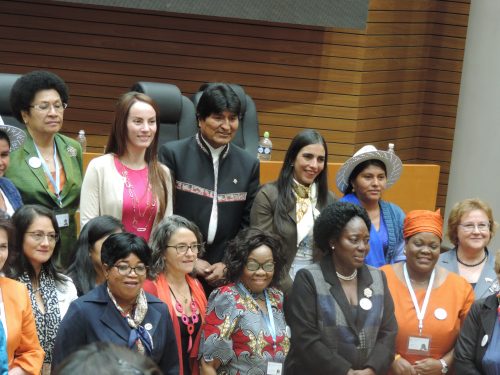 The Speaker of Parliament,  Rebecca Kadaga has asked parliaments to provide funds as an incentive to minorities to compete for leadership positions.

Kadaga said parliaments should make it a requirement for political parties to identify their cadres who belong to social minorities, and finance their involvement in national leadership for inclusivity.

The Speaker made the remarks during the 12th Summit of Women Speakers in San Benito, the capital of Bolivia in South America.

“Political Parties can better attract membership of diversity by including in their manifesto specific programmes that would facilitate the recognition and placement of the populations including giving them leadership positions,” said Kadaga.

“This requires commitment and dedication; it might even involve supporting the candidates financially to enable them to vie for the offices.   As leaders of the democratic institutions, it is important that we create an enabling environment for the funding of the political parties,” she added.

The Summit, which was opened by Bolivian President Evo Morales, is themed on diagnosing women under-representation, inclusive societies and parliaments and finding solutions to political violence among others.

Kadaga said parliaments should take steps to establish whether the indigenous populations are visible and included in the development programmes.

She called for affirmative action in favor of the minorities for a more inclusive society.

She further commended the Bolivians upon achieving gender parity in their Parliament and across the political spectrum, and urged other member states to embrace the same.

President Morales said his country is racing towards universal equality despite isolation from the United States of America, with whom they currently have frosty diplomatic relations. “…without the American Embassy, without the World Bank, without the International Monetary Fund, we are economically better off and likewise in terms of our democracy, and we have better results in our administration,” said Morales.

Morales said their experience demonstrates that a country, once committed, can achieve equality without over reliance on other nations.

He urged world leaders to embrace the affirmative action policies applied in their country, which has yielded parity representation, with the Chamber of Deputies having 58 per cent women representation.

“In the Senate, we have  44 per cent, whereas in the national Parliament, women have 50 per cent representation”, President Morales said.