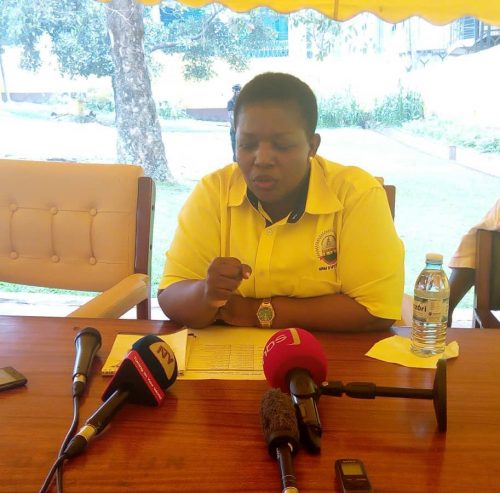 NRM Secretary General Rt. Hon Justine Kasule Lumumba has partly blamed the Wednesday loss in Arua Municipality by-elections on the violence caused by the opposition camps before and during polls.

She has disclosed that such scenes of chaos scare away the women who constitute the majority voting population of the ruling party and give an edge to the defiant men in the opposition.

“Violence during elections affects us more as it scares away the women after developing fear,” the Secretary General told a press conference at the party headquarters in Kampala this Thursday afternoon.

The Secretary General strongly condemned such acts and called upon the security agencies always to react to them with maximum attention in order to protect the innocent women from shying away from their constitutional rights.

Commenting about the trending ‘People Power’ slogan, SG Lumumba said its more suitable for NRM which commands majority support in the country than those without even clear political inclination.

Going by the results as declared by the National EC last night, she observed that NRM held its primaries late and there was therefore no time to reconcile its candidates some of whom ended up getting nominated for the general elections.

The total number of votes gathered by the party flag bearer and other NRM-leaning candidates was far bigger than the opposition. This, she said is an indication that NRM would have taken this seat if it had only one party member in the race.

She added, “We shall continue correcting our mistakes to win back these positions in future.”

Blame Yourself For Absence of Ministers Gen.Moses Ali tells off Parliament