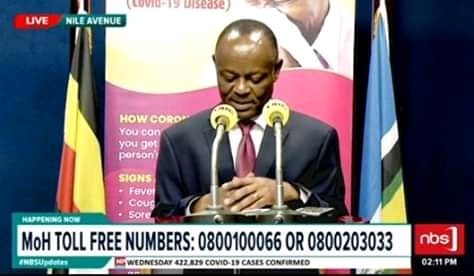 An eight months old baby has been named among the five new COVID-19 cases confirmed in Uganda this afternoon.

The toddler whose father travelled from Kisumu in Kenya about a week ago presented with flue and difficulty in breathing before it was taken to Iganga hospital and admitted there.

According to Dr Henry Mwebesa the Director General Health Services at the Ministry of health, the health workers at the facility on seeing the condition of the baby took a sample and sent it to the Uganda Virus Research Institute (UVRI) where it was confirmed positive of Covid-19.

The other victims include a 63- year -old male Ugandan a resident of Najjanankumbi who travelled from Germany and is currently under quarantine. He presented with high fever, cough, sore throat and shortness in breathing at the time of quarantine.

A 57-year-old Ugandan male businessman from Adjumani is also among the new victims. Although information shows that he had not travelled from the country, he does business at Elegu border (Uganda- South Sudan border) he is currently admitted at Adjumani general hospital in isolation.

The other two victims are Chinese who travelled from China and had been under quarantine in the country. These are part of the six Chinese who escaped from quarantine and tried to cross over to DRC via Zombo district but we’re brought back in quarantine.

Samples from the six were taken and four of them tested negative while the two tested positive.

This brings the total number of the confirmed cases in Uganda to 14.

He appeals to Ugandans to remain calm and also follow the ministry of health guidelines to avoid further spread of the virus.