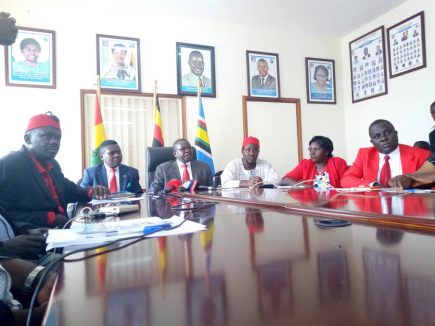 The insider’s guide; a breakdown of LOPs
and their failures to perform in their
tenures of leadership

By Timothy Sibasi-In the corridors of Parliament

An inside analysis into the failures of the different opposition regimes to scrutinize government and to offer alternative policies starts with the reign of Prof. Ogenga Latigo as the Leader of the Opposition in the 7th Parliament.

Dig-up from the archives, barely four months after his appointment as leader of the opposition in the 7th Parliament, Prof. Moris Ogenga Latigo admitted that he was never recognized by the government and the general public most of the time despite of the fact that a leader of opposition customarily is seen as the alternative Prime Minister and heads an alternative government known as the Shadow Cabinet or the Opposition Front Bench.

This was an indictment on the opposition in the 7th Parliament and the other reigns of opposition leaders to come in future. This will partly explain a head why the Opposition and Shadow Cabinet have failed to offer alternative policies and programs to those of the government in power.

Prof. Ogenga Latigo’s remarks could not spare him; for he had presented a different believe of his party the FDC. Ogenga Latigo was summoned by the National Executive Committee of the Forum for Democratic Change to explain why he had been inconsistent in executing his duties. Then the FDC’s Secretary General, Alice Alaso blew the issue out of proportion in a letter written to Latigo on 7th September 2006 and signed by Alaso.

FDC was concerned that the party’s Parliamentary Caucus had not held meetings on a regular basis leading to party MPs giving conflicting statements. Latigo in his response to Alaso, described her as over reacting and claimed that Alaso should have written a small note to him highlighting the concerns.

FDC was also concerned about Latigo’s remarks on a talk show aired on Uganda Broadcasting Corporation on the night of September 6th 2006. The statement alleged that during the programme, Latigo defended a 65 million shilling grant to MPs to purchase cars. However this to the FDC, Latigo’s remarks didn’t represent the official position of the party, though Latigo in his defense said the MPs facilitation was consistent with FDCs’ policy position and was also a requirement by law. Latigo’s failure to understand the principals and values of his party the FDC was a precursor to the disorganization of the futures opposition reigns in Parliament.

Was the reign of Nathan Nandala Mafabi as Leader of the Opposition in the 8th Parliament of any difference from that of Prof. Latigo in the 7th Parliament?

Under Nandala Mafabi as leader of the opposition in the 8th parliament, in the act of self-appraisal, a score of opposition MPs admitted that they were underperforming as watchdogs of the Executives.

At the start of 2012, opposition MPs, led by Budadiri West’s Nathan Nandala-Mafabi (FDC), met at Nile Resort hotel in Jinja to assess their performance and lay strategies for improvement. The retreat, coming six months into the Ninth Parliament, discussed plans to introduce constitutional amendments and pro-people private member’s bills, strengthen scrutiny of the NRM government through accountability committees, and enhance advocacy for pro-people alternative policies.

More than two years later, it was clear that the roadmap had not been followed.

This compelled the Accountant General Lawrence Ssemakula to write to Parliament complaining about the failure of accountability committees to scrutinize the auditor general’s reports.

“The delay to complete reports in accountability committees and the absence of approval of the said reports by Parliament affects timely preparation of treasury memoranda,” Ssemakula wrote.

A treasury memorandum shows government’s actions taken on Parliament’s recommendations arising from the report of the auditor general. Parliament’s accountability committees include those on Public Accounts, Local Government Accounts, and Commissions, Statutory Authorities and State Enterprises; all these committee are chaired by opposition MPs.

In a snap survey of opposition MPs conducted in 2012 found that they largely agree with Ssemakula – that they had not achieved the goals they set for themselves.

“It is so disappointing that Ugandans spend a lot of money on us but we have not delivered even the little we set out to do. It is a sad story,” said Masaka municipality’s Mathias Mpuuga.

The opposition is assumed to be a government-in-waiting, providing alternative policies and checking government excesses through its shadow cabinet and leadership of the accountability committees. This was the biggest weakness of Nandala Mafabi’s reign as opposition leader but was yet to unravel the worst of the 9th Parliament which completely failed to scrutinize government.

Stakes were high in the 9th Parliament, under the opposition reigns of Walter Wafula Ogutu, but little did they know that his regime was going to suffer from doll drams of failures to scrutinize government.

Why the 9th Parliament failed to scrutinize ruling NRM government?

Although Parliament is charged with holding the executive to account, an independent survey shows MPs did do a good job.

But a snap survey of opinions from MPs themselves found that these committees, set up largely to monitor the use of public funds as per Article 164(3) of the Constitution, underperformed.

“Indeed, some of our committees have not worked to our satisfaction and this affects the performance of Parliament in terms of monitoring public expenditure,” Aswa MP, Reagan Okumu.

Since start of the 9th Parliament, the Auditor General released several audit reports which were either shelved or their considerations by the respective committees were painstakingly so slow. For instance, financial audits from the AG for years ending 2010 and 2011 were submitted to the LGAC but were not disposed of.

“There are genuine issues raised in these reports, like poor performances of funds sent to the districts, misuse of resources and funds. But in no case have we seen a report made by the committee on these issues,” says former Busiro South MP Joseph Balikuddembe (DP).

In the 9th Parliament, LGAC was chaired by Jack Sabiiti (Rukiga, FDC), deputized by Odo Tayebwa (former MP Bushenyi-Ishaka municipality, FDC). The committee was feared, when it was headed by the current shadow attorney general, Abdu Katuntu, for grilling local leaders.

The committee on Commissions, Statutory Authorities and State Enterprises (COSASE), also appears to have underperformed. There are two annual financial audits of public bodies that were submitted to COSASE for scrutiny but no committee report was tabled in Parliament.

COSASE’s work schedule reveals the committee was supposed to have finalized consideration of the Auditor General’s reports on Uganda Revenue Authority, Uganda Investment Authority and Uganda Bureau of Statistics for years 2002 to 2010 and wrote its report by September.

However, COSASE Chairman Amuriat Oboi (Kumi, FDC) then, blamed the slow progress on tight schedules. “It is rare for the members of my committee to sit and consider the subject matter as before because of the demands on them from their sessional committees,” he says.

Oboi added that for instance a report on UIA was completed last but never found space on the congested order paper.

However, the committee on Government Assurances appears to have done some good work. It was Chaired by Odonga Otto (FDC, Aruu), it wrote two reports on promises made by government officials.

“This is unprecedented in the history of Parliament. But, now we can just refer to the committee’s published report and hold the government to account for failure to fulfill a particular assurance,” says MP Okumu.

Then it was chaired by Kassiano Wadri (Terego , FDC) with Paul Mwiru (Jinja municipality East, FDC) as vice, PAC was more vibrant under the leadership Nathan Nandala-Mafabi. However, it never fared badly.

The committee reported on the fraudulent compensation of colossal sums of money to private firms whose contracts with government were cancelled. Its work, on the Basajjabalaba compensation scandal, also led to the resignation of two ministers Khiddu Makubuya and Syda Bbumba.

But PAC, too, had unfinished business – such as the questionable compensations to different companies like Dura Cement and Beach Site as well as the Shs 5.6bn given to the Burundi government.

Sometimes this poor performance boils down to political intrigue. A technical staff, for instance, pointed out that when PAC had just started with Maruzi MP Maxwell Akora (UPC), an accountant, as Wadri’s vice, performance was good. Akora was withdrawn from PAC after his party (UPC) refused to back an FDC-led move to boycott the election of representatives to the East African Legislative Assembly.

Trump isn’t the first US President to get a North Korean invite. But he’s the first to accept.