Bobi returns to court on 30th-August 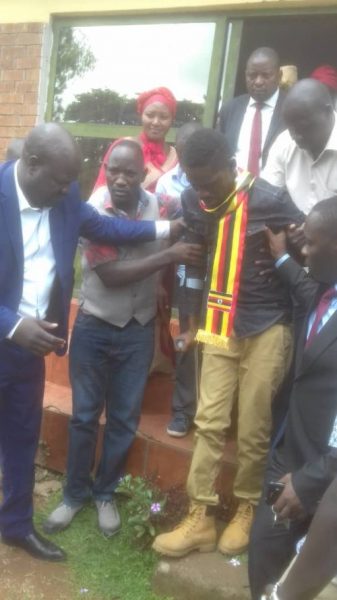 The Kyadondo East MP Robert Kyagulanyi popularly known as Bobi Wine on Thursday appeared before Gulu Magistrates Court where he was charged with treason.

He was then remanded to Gulu prison until August 30, 2018 when he will return with others.

Mugisha however asked court not to set the suspect free but hand him to police for further investigations which the chairperson of the general court martial Lt. Gen Andrew Gutti declined and set Bobi wine free after spending 10 days behind the bars.

However Bobi’s freedom short lived as he was pronounced under arrest at the exit door of the military court. His lawyer Medard Seggona announced the news of the rearrest to his client and asked Bobi wine’s supporters not to interrupt police as the suspect was not in good condition .

The limping Bobi was helped to sit in the police car with his wife Barbra Itungo and driven to Gulu Chief magistrates court by police under command of the director CID Grace Akullo who was part of the audience in the military court room.

The Gulu Magistrate Yunus Ndiwalana slapped fresh charges related to treason which he allegedly committed with 30 others. He was remanded to 30th August and allowed access to private treatment.