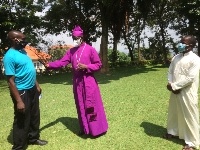 Musoke Ibrahim a father to Rahim who is now eight years

Being a good father does not necessarily mean having money but having better love and care for the family at all times, be it good or bad makes a man a better father in life.

Musoke Ibrahim a father to Rahim who is now eight years and studies in primary four, was born with spina bifida and hydrocephalus but has never lost his father’s love and care.

Speaking to Musoke, he reveals that Rahim is a blessing to him and the family, since his birth and all these years my wife and I have been able to learn how to care for everyone even when it is hard to do so.

At the birth of Rahim, I was treated to a series of comforting words by the doctors at Mengo hospital not knowing that I and my wife were going to face some challenging times ahead with our baby boy. Being a believer and a lovely daddy, I accepted what had happened then.

Even when we have spent millions to rehabilitate and treat Rahim since birth, this has not lowered my spirit to love and care for him as a father. Someone might think heaven sent with too much money on me, but this is not the case.

My love and religious beliefs have enabled me and my wife to stay as one to fully support, parent Rahim all these years, which we are not going to stop very soon.

In a related development is Ssekitende Daglous a father to the late Brenda who was abandoned by his wife when she realized they had given birth to a child with spina bifida and hydrocephalus complications.

He raised her late daughter Brenda from baby stage and at this time he had to raise money for the operation in one of the best hospitals in Kampala, which he successfully did.

Ssekitende further managed to take late Brenda for therapy regularly without fail even when it had rained, and the zil he exhibited sometimes inspired very many parents with special needs children.

The two men who today met the archbishop of the church of Uganda Dr. Stephen Kazimba Mugalu under the hospice of Spina bifida and hydrocephalus awareness association of Uganda urged fellow men to always endure and support their children in case they were born with special difficulties.

However, the archbishop reminded Ugandan fathers of king David who welcomed king Saul’s son who had been neglected by society and his parents. He further challenged men to emulate the example of king David and the two gentlemen (Musoke and Ssekitende) to always support their wives and children even when they are having children with disabilities.

Now, the national coordinator spina bifida and hydrocephalus awareness association of uganda, Ruth Nalujja reveals that Uganda welcomes over 6000 new lives with the health complication and not more than 10% of the father have continued to stand the hard times with their wives and children.

Health experts advise expectant mothers to always take all the antenatal visits during times of pregnancy, above all follow the doctors and nurses’ guidelines.

The complication is mainly caused due to lack of minerals in the expectant mothers’ body and blood among them zinc and many other vitamins as well as other conditions during birth like delayed delivery.